HE TAOKA O TE RĀ (OBJECT OF THE DAY)

In Māori mythology, hue (or gourds) are personified by the deity Hinepūtēhue, the youngest daughter of Tāne and Hinerauāmoa. It is said after the separation of Ranginui and Papatuanuku there was terrific fighting amongst their children. When Hinepūtēhue heard of the fury flying in the winds she intervened and captured the anger of the gods in her gourds of love.

Hue have been over-achievers in the plant world, being used for many purposes since they were first cultivated by humans at least 10,000 years ago. Along with kumara, they were introduced to New Zealand by Polynesian settlers. When small, their spongy flesh was eaten. Larger ones were left to mature and were hollowed out, dried in the sun or by the fire, and made into containers or bowls.

While traditionally hue were used as storage containers they were also made into taonga puoro, traditional Māori instruments. There are a number of different types of hue instruments in the family of Hinepūtēhue, ranging in size and musical sound.

Hue were also a flotation device before the invention of the modern day noodle, serving as water wings for children when they were learning to swim. The hue’s use went beyond the practical – it was also a symbol of fertility. A woman who was unable to conceive is said to have rocked a hue in her arms whilst singing the words:

Nō te hiku anō te aituā
He hue te tamati oriori ē!
It was in the begetting where I failed
Thus it is to a hue child I sing a lullaby!

Hue have a strong tradition of being elaborately decorated in cultures across the world. Māori beautifully ornamented their gourds with carved, incised or painted designs. A gourd that was the personal property of a chief would have part of the moko of that chief carved into it and thus the tapu of the chief transferred onto the object.

Purchased for the collection in 2013, these Reuben Paterson gourds represent Otago Museum’s commitment to actively collect in the sphere of Māori contemporary art. Gourds became a point of departure for Paterson (of Ngāti Rangitihi hapū of Te Arawa and Tūhoe, Scottish and Pakeha descent) while he was living in Greece (2005-2006). He identified correlations between the Greek and Māori uses of the gourd as a cultural object.

Paterson is known for his contemporary treatment of motifs, materials and spaces. Updating the traditional with reflective materials such as glitter, diamond dust and sequins is characteristic of his work. His use of glitter, which combines old and new, not only explores the properties of light but also carries with it notions of past, present and future. His work consistently acknowledges his whakapapa, such as his 2000 work The Wharenui that Dad built and his psychedelic glitter paintings inspired by the 1960s fabrics his grandmother wore.

This set of six gourds was originally exhibited in the exhibition Bottled Lightning curated by Andrew Clifford at the Gus Fisher Gallery (20 January – 3 March 2012, Auckland). In this setting they were originally displayed hanging in clusters from plaited cotton cords attached to the wall. 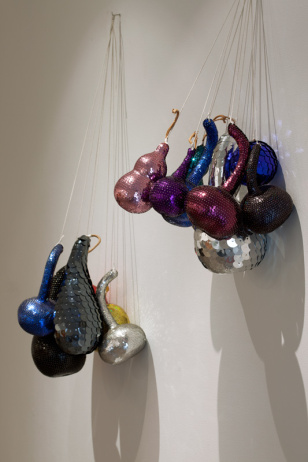 Gourds from this series have also been exhibited alongside Manos Nathan’s Hue I and Hue II (1983) in Whangarei Art Museum, simply side by side.

Across the six there are two types of surface covering – sequins and shimmer discs– and various shapes, all capturing and throwing the light in a range of colours from dusky grey to baby pink. 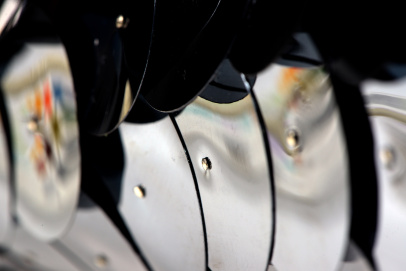 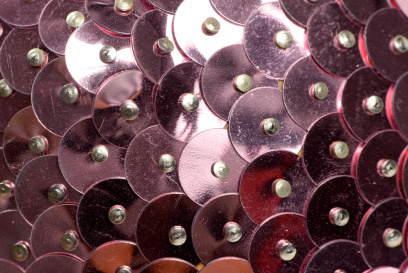 Paterson is interested in “extending the painting outside its frame” and this work signifies a move from the wall to the three-dimensional space of sculpture. While the gourds themselves seem to pulsate and mesmerise, when moved the loose seeds inside rattle and shake like a xylophone. By ornamenting the gourds so elaborately I wondered if Paterson was taking a utilitarian object and depriving it of its ability to be usable again? Turns out not so: it’s clear when the gourds are moved that they are not only beautiful but also delightful to listen to.

When the pieces arrived at the Museum there was much discussion about where their home in the storeroom should be. In Ceramics? With New Zealand contemporary artists such as Madeline Child and Ralph Hotere as their neighbours? It was decided they would be stored alongside other Māori gourds in Māori Organics. The effect of encountering Paterson’s gourds alongside the traditional, less ornamented ones, is unexpectedly magical.

Art can induce an emotional response from the viewer – positive or negative. I am drawn to Reuben Paterson’s work not only for its physically enchanting qualities but also for the song it sings. For Te Wiki o Te Reo Māori I have chosen the following whakataukī to encapsulate my response to these objects and perhaps to Paterson’s work as a whole: