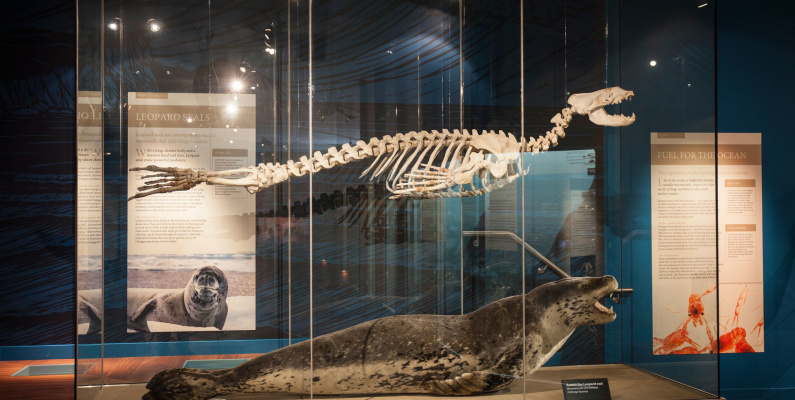 Named for the star that appears in the pre-dawn sky during Matariki (the Māori New Year), she’s a visitor favourite in our Nature galleries. Her pelt was mounted below her articulated skeleton in the same position, which is a great way to compare the internal structure with the external form.

Leopard seals usually inhabit the chilly waters around Antarctica, but they are occasionally seen on the Otago coast. In November 2009, Autahi was found on Waikouaiti Beach (just north of Dunedin).

Following a blessing by representatives from Kāti Huirapa Rūnaka Ki Puketeraki, she was retrieved by the Department of Conservation. That wasn't a small undertaking, given she’s 3m long and weighs almost 300kg!

Autahi was a mature female who gave birth to several pups during her lifetime. When she died, she was suffering from an infection in her teeth and gums, and her large canine teeth were cracked and missing.

A sharp spine from a fish in the Chimeridae family was found inside her mouth. The spine had pierced her face, becoming lodged between her cheek and gum. It’s on display with her in the gallery.

Ultimately, Autahi died of a pneumonia infection in her lungs. It could have been aggravated by the poor condition of her teeth making it harder for her to feed.

As well as having bad teeth, Autahi suffered some broken bones. On her right side, a rib and toe show evidence of fractures. You can see some scars matching those injuries on her mounted pelt.

Autahi was taxidermied in Christchurch, which took several months to complete. Her skin was skilfully removed, then tanned and fitted over a custom-made mould. Finally, it was carefully sewn back together.

While her skin was undergoing taxidermy, Autahi’s bones were cleaned for articulation. The articulation project was undertaken by Judith Streat, an innovative sculptor and articulator. Each individual bone (there were 178 total!) was measured and laid out in the correct anatomical position. The entire process took around 930 hours to complete.

A strong metal armature supports the vertebrae. Wire mounts securely cradle each bone in position. This method of articulation does not damage the skeleton, which means it can still be used for research in the future.

The skeleton and pelt finally reunited in the Nature galleries display, where Autahi lives a second life as a beautiful educational tool, an introduction to our seas and a consistent scene-stealer.