Once we had sussed out the vision for the iD Dunedin Fashion Week Time Warp case in terms of theme and object selection, the next step was visualising it. But we faced a problem: all our mannequin cases were already in use in the Hākui exhibition. We had to think outside the box – or case, as it were.

Craig and the lightbulb

We had come up with a number of different concepts, centred around displaying objects in a bedroom setting, but nothing felt right. Enter Otago Museum Head of Design Craig Scott, who had the inspired idea to convert our cloakroom into a display area. Like most lightbulb moments it was completely accidental, and occurred one afternoon when the coat hanger symbol above the cloakroom door caught his eye.

Once suggested, the idea was perfection. Not only did it circumvent installing a temporary case in the Atrium Foyer (which would need to be moved for events) it also created a display area protected from the harmful rays of natural light. This meant it got a big tick of approval from Conservators Nyssa Mildwaters and Lisa Yeats.

Necessity is the mother of brilliance

As with most design solutions, their brilliance becomes more apparent after the decision is reached. We realised that this experimental approach wasn’t just a solution to a space problem: it was a nod to the rebellious nature of the 1970s. The decade was all about revolution and liberation, and absorbing this mentality throughout our entire design process seemed only right.

If we altered the original space too much, visitors wouldn’t recognise the deliberate disruption we had created. To make sure the display still alluded to the functionality of the lockers, we left all but eight of the locker doors intact. The intention behind the display was to create an intervention in what would otherwise be an entirely predictable public area of the Museum, not to convert the space into another gallery. 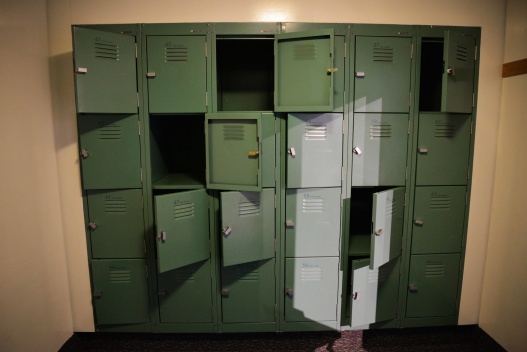 Lockers in the Otago Museum cloakroom

The size of the space available within each locker dictated the scale of the objects we could put on display. The lockers suited themselves perfectly to being converted into 1970s cubbyholes of hippy-chic and disco-glam accessories. This meant that smaller objects from the era naturally found themselves standing out for selection first, including numerous pairs of platform heels of various heights, materials and colours, a sequinned beret displayed on a glass head (a bold decision by designer Annah Taggart), a printed and flocked St Michael's brassiere and a Rolleicord camera, complete with its psychedelic original packaging. 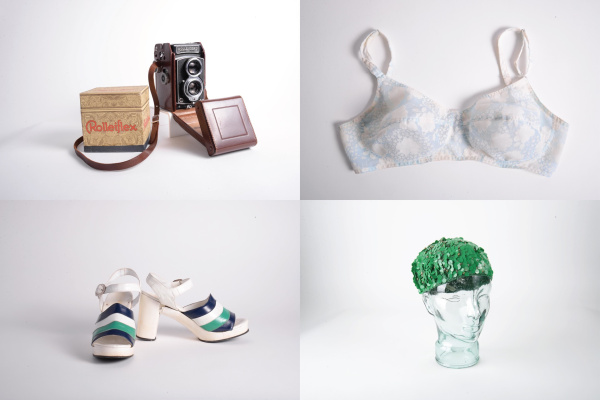 A few of the objects in the Time Warp display

To extend the case out further Annah suggested the incorporation of a stage-like plinth at the base of the case in front of the lockers on which we could display additional objects that were unable to fit in the lockers. Opening up the object selection allowed us to include a possum-trimmed coat displayed on a mannequin and a selection of menswear fashion and accessories. 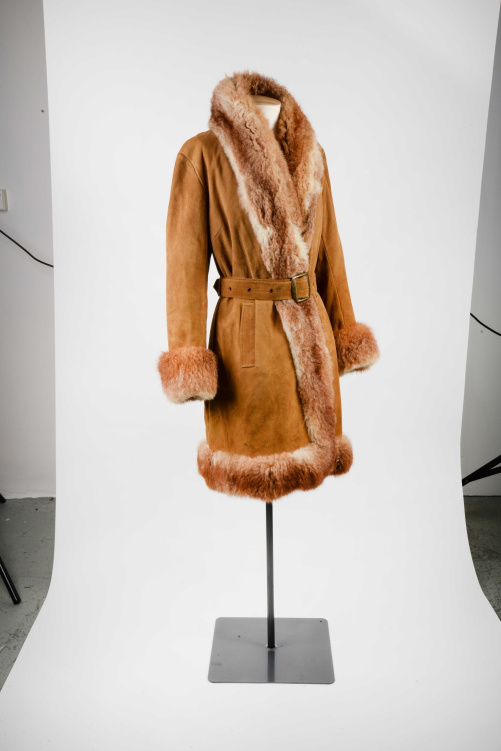 “You want the cloakroom to what?”

During Craig’s cloakroom-takeover revelation, he also had a vision that the visitor would be enticed into the space with a bold, vinyl pattern spilling out of the coatroom onto the Museum’s foyer floor. The words “vomiting vinyl” may have been used. 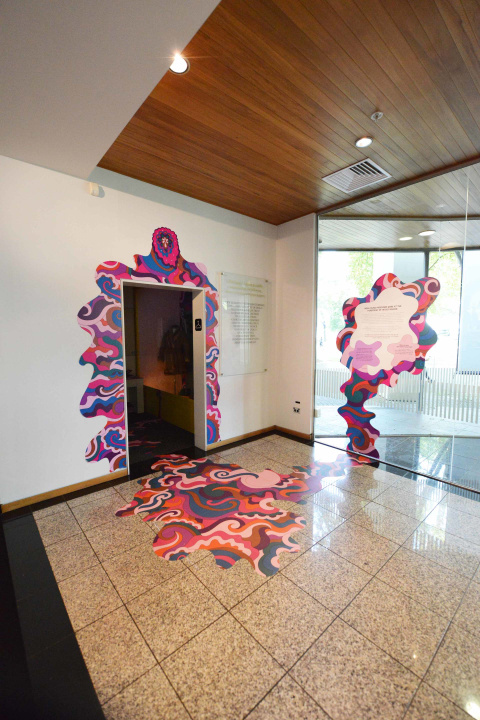 Once everyone got their heads around this idea, Annah set to work creating a sumptuous pattern inspired by shapes, colours and motifs from ‘70s textiles in the Museum’s collections. In the ‘70s an abundance of floral motifs and nature patterns emerged, while the geometrics and stripes from the 1960s still stuck around. The pattern Annah created takes inspiration from textiles in the collection but frames it in a fresh way.

Install started with Facilities Manager Tom Csima removing the doors from selected lockers. Annah and I then set to work scrubbing them to within an inch of their lives with a hearty mix of 50% ethanol, 50% water. Before we got too lightheaded, the team installed the mustard plinth and we were ready to rumble for object install.

But rest assured we rumble in the most careful way when it comes to object handling. 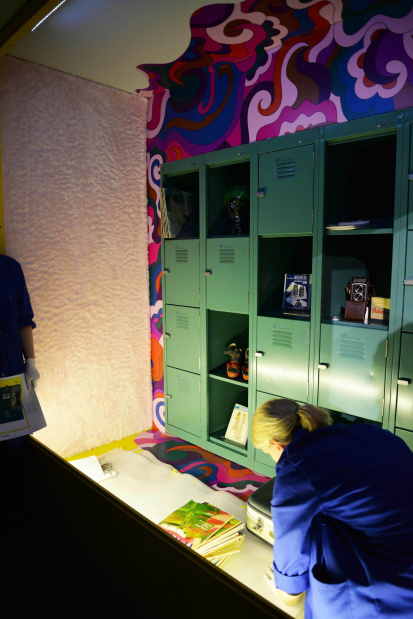 Conservator Lisa Yeats brought objects down from the Conservation Lab to the cloakroom in batches. We started by installing the objects in the lockers. To protect the items we cut out a mylar barrier to place between the object and the surface it was sitting on below. This is always a bit time-consuming but helps our Conservators sleep soundly at night.

Once all of the objects were installed and looking appropriately glam, an acrylic sheet was fitted across the front of the display to stop any hands getting a little too familiar.

Surprisingly, it was the vinyl that caused us the biggest headache on install. Fitting the pieces together to create the effect that the pattern was spilling out of the room got more and more challenging as the day went on. But at approximately 4.30pm our mission was accomplished and the exterior of the cloakroom was looking suitably trippy and psychedelic. 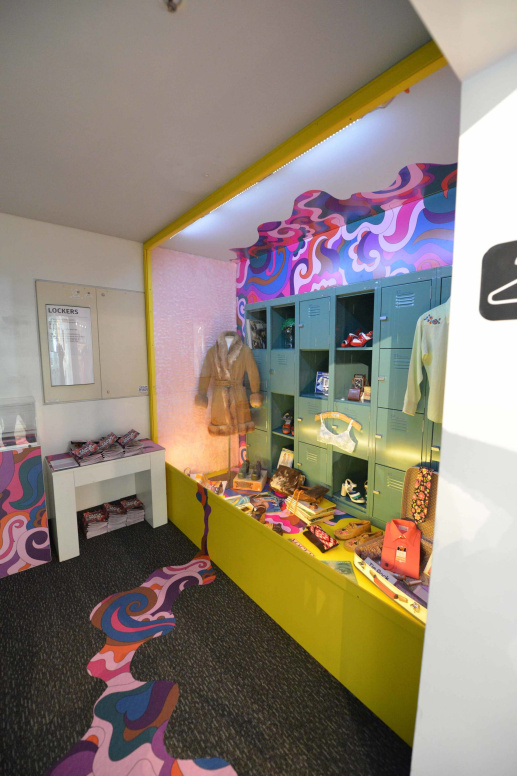 Displays like these are one of my favourite parts of the job. They let us share more of our collection, which is so important for us – if we’re not sharing our objects, then we’re just a beautiful vault. The scale of iD Fashion Week displays is small enough that we can experiment a little more than we might be able to in a full exhibition, pushing the envelope in terms of design and interpretation.

And even though the space is small, the final payoff in terms of impact and experience is huge. If you haven’t had your socks knocked off yet, come in and see it this weekend! And if you do a secret little Time Warp dance while you’re in there, we would never judge.