iD Dunedin Fashion Week is one of my favourite times of year. With an early date for 2016, fashionistas are rugging up sooner than usual. Everyone is searching for their best NOM*D to freeze on the railway in style with a glass of bubbles in hand.

It has become a tradition for Otago Museum to celebrate iD Fashion Week by creating a special display showcasing textiles which aren’t normally shared with our fashion-savvy audience. In the past we have glittered in gold, tip-toed in heels and demystified the process of costume mounting.

This year I wanted to draw a parallel between our iD Fashion Week display (the trippy cloakroom takeover Time Warp) and the stylish, ground-breaking outfits worn by many of the wāhine featured in the Hākui: Women of Kāi Tahu exhibition.

An embroidered clutch which once belonged to Emma Grooby Potiki is one of 40 objects featured in Time Warp. The clutch is actually made to match a bodice (also in the Otago Museum Collection) of similar design and pattern. 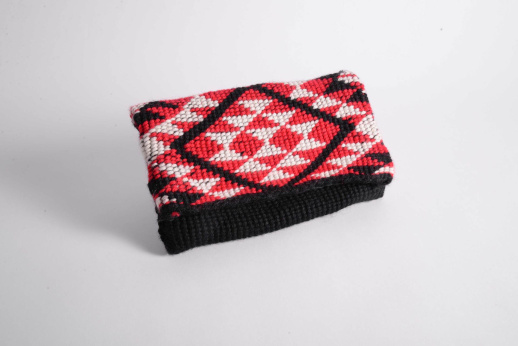 Embroidered clutch that once belonged to Emma Grooby Potiki, currently on display in Time Warp

The clutch is displayed alongside other 1970s accessories and garments from Otago Museum’s collection, giving the viewer an indication of how diverse the styles of this decade were.

The fourth section of the Hākui exhibition profiles hākui who are the personification of whenua. This includes the likes of Emma Grooby Potiki, Rima Bell, Whetu Tirikatene-Sullivan, Magda Walscott, Te Mahana Walsh and Linda Grennell (to name only a few) who were the movers and shakers of their generation.

Some wāhine of style

Within the Hākui we display contemporary pieces from Emma Grooby Potiki and Whetu Tirikatene-Sullivan’s wardrobes. Grooby and Tirikatene-Sullivan were both very active in the 1970s influencing each other’s fashion choices and being amazing, ground-breaking women.

While Emma clearly preferred a structured suit and Whetu a flowing kaftan, one can still see the correlation between Grooby and Tirikatene-Sullivan’s garments in the iconography. Their wardrobes also functioned as carefully considered statements, bringing traditional Māori designs into a contemporary context.

The garments Whetu wore existed on the on fashion fringe and were intended for women who wanted an alternative to mainstream clothing. During the 1970s, Whetu developed a collaborative relationship with Frances Edith Buss (1910–1986), founder of the Christchurch-based label Fanny Buss. Together, Whetu and Fanny were a dream team; Whetu created garments of her own design from the fabrics Fanny produced.

In 1970 Whetu pursued her love of fashion by opening the Ethnic Art Studio in Wellington. Twenty handcrafters and key Māori fashion designers produced designs for the boutique when it opened. They included designers who blended fashion with tradition, and a number of non-Māori designers who used Māori motifs, like Janice Hopper (Kowhai Knitwear).

Whetu’s approach was inclusive and paved the way for this type of design to be both accessible and fashionable. This 1970s block-printed silk gown was purchased by the donor from Whetu’s Wellington boutique, the Ethnic Art Studio. 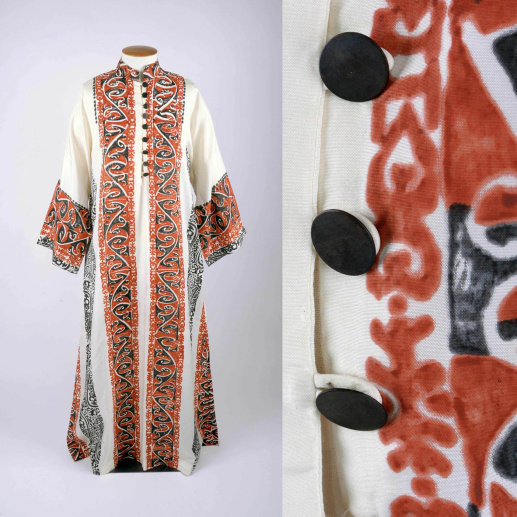 Emma Grooby Potiki donated a number of her own garments to the Otago Museum Collection in 1994. Her collection is filled with designs that combine sharp, simple shapes with bold, colourful and contemporary patterns. Emma and Whetu’s garments are stylistically different, but there is still a clear link between them. While Whetu’s choices were bold and unmistakably Māori, Emma incorporated elements of the same iconography but on a more everyday level.

One example is this mustard yellow two-piece suit. The brown interlocking koru motif projects an image of a confident woman, seamlessly blending contemporary Māori design in her wardrobe. 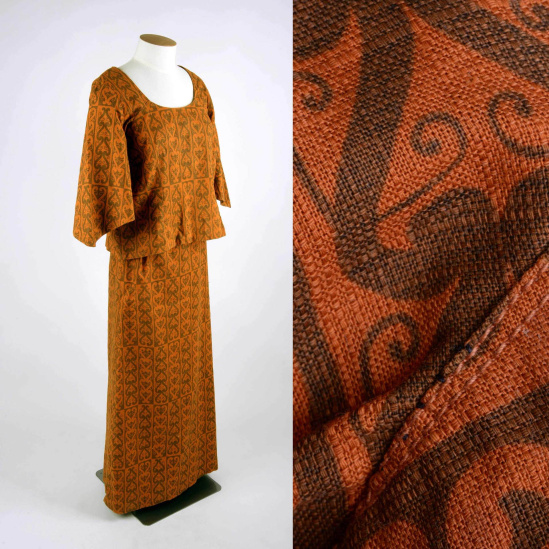 One dress, many wāhine

Though we don’t know who designed the dress in the image below, we do know it was previously owned, and likely worn, by Whetu Tirikatene-Sullivan. It was donated to the Otago Museum by Emma Grooby Potiki in the 1990s. The centre-front and hem of this 1960s black ankle-length dress with long sleeves is decorated with a machine embroidered ngutu-kākā pattern.

Like Whetu, Emma was a woman committed to her community. The two women worked together along with Magda Walscott and Dr Erihapeti Rehu-Murchie to secure land for the Araiteuru Marae located at 24 Shetland Street in Kaikorai Valley, Dunedin. The graphic interlocking shapes on the dress beautifully reflect the relationship between these women, all trailblazers in their own right.

The 1970s were a particularly important time for Kāi Tahu wāhine. In 1972 Whetu was sworn into Parliament, recognised as the youngest woman elected to the New Zealand parliament and the first female Māori cabinet minister. In 1975 Emma was awarded the Order of the British Empire, recognising her years of service to the Māori people and wider community. In 1977 she was invited on board the Britannia as one of two Māori representatives to dine with Queen Elizabeth. This is only a snapshot of what these two women achieved – as a whole it is astounding to process what these women accomplished in their lifetimes.

The Time Warp cloakroom takeover is on at Otago Museum from Friday 11 March. Come see 1970s treasures, from towering cork platforms to a possum-trimmed coat, and see why the decade is still influencing designers today.

The Hakui: Women of Kai Tahu exhibition is on at the Otago Museum through 8 May 2016. Kā uri whakatipu, today’s generations, recount the achievements of respected Kāi Tahu wāhine and share the stories of their hākui through treasured taoka, photographs and memories.