Welcome to the Sky Guide, your monthly guide to what's happening in the heavens!
Check out the printable version here: Sky-Guide-June-2020.pdf.

While we might miss the hours of sunlight during wintertime, the long nights are great for stargazing. Having more hours of darkness means that there is more time for us to see different things rise and set throughout the night, making it easier to see objects such as planets.

Due to the presence of a galaxy cluster, called the Virgo Cluster, the constellation Virgo is particularly rich in terms of containing other galaxies, at least 1300 of them! This cluster forms the heart of the larger Virgo Supercluster, a concentration of at least 100 galaxy clusters and groups including the Local Group, which our galaxy, the Milky Way, belongs to. 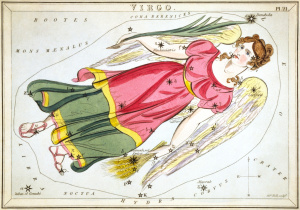 Virgo as depicted in Urania's Minor by Sidney Hall

The largest and most well-known member of the Virgo Cluster is the elliptical galaxy Messier 87, which is located at the centre of the cluster. Messier 87 is the second brightest galaxy in the Virgo Cluster, and one of the biggest galaxies in the Local Universe.

The shape of Messier 87 is elliptical, so unlike disk-shaped spiral galaxies such as our Milky Way, it doesn’t have distinctive dust lanes. Messier 87 has a large number of globular star clusters, containing an estimated 15 000 compared to the roughly 150 that we have in our own galaxy.

Messier 87 made headlines in April 2019 when the supermassive black hole at the galaxy’s centre was the first to be imaged.