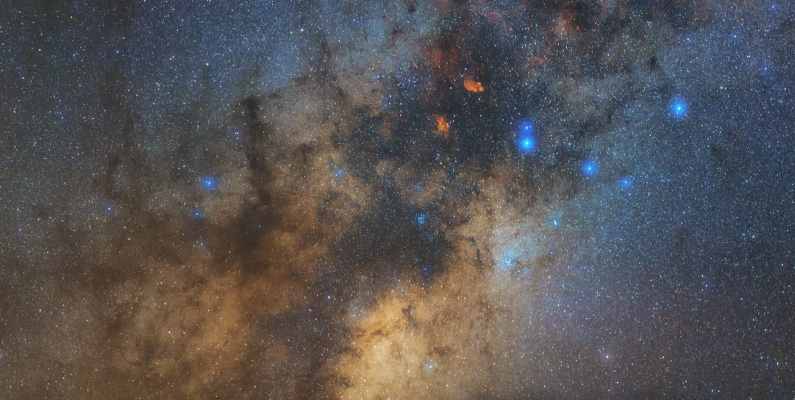 Welcome to the Sky Guide, your monthly guide to what's happening in the heavens!
Check out the printable version here: The-Sky-Tonight-May-2020.pdf

Occurring from 19 April to 28 May, the Eta Aquarids is a meteor shower that is capable of producing up to 30 meteors per hour at its peak, with most of the activity seen here in the Southern Hemisphere. It peaks this year during the first week of May.  While the brightness of the nearly full moon at this time will reduce the visibility of the meteors, the brightest ones will still be visible. The best viewing conditions are after midnight, through to the early hours of the morning, at a dark location away from light pollution. The meteors will radiate from the constellation Aquarius in the east but can appear anywhere in the sky.

The Eta Aquarids are produced by dust particles that came from Halley’s Comet hundreds of years ago. The current path of the comet is to too far from Earth to produce meteorites now. When comets pass the sun, they leave behind a trail of ice and rock particles. When the Earth passes through these trails, the debris collides with our atmosphere and disintegrates, creating the bright streaks we see in the sky. The debris from Comet Halley becomes the Eta Aquarids in May and the Orionids in October.

This month, we have a window of opportunity to see two constellations that tell a story together, but that we usually see at opposite times of the year.

During summer, you may have seen the constellation Orion in the sky, easy to spot due to the three bright stars in a row that make up Orion’s belt. As we head into winter, Orion is moving down towards the horizon in the west, and another constellation is rising in the east – Scorpius.

The names of these constellations both originate in Greek mythology. Orion was a skilled hunter, who liked to boast that he could hunt any animal on Earth. In one of the many, and sometimes conflicting stories about Orion, the Earth goddess, Gaia, was upset about this, and sent a giant scorpion to see if Orion could hunt it. It turned out that Orion wasn’t as powerful as he claimed, and the scorpion won the fight.

After the battle, Zeus placed both Orion and Scorpius in the stars, as a memorial to the hero’s death.  As Orion sets below the horizon in the west, we can see Scorpius rising in the east.

The best way to find the constellation Scorpius is to look for its brightest star, Antares. Appearing red when viewed with the naked eye, this star was said to represent the heart of the scorpion. Antares is a red supergiant star, and while its size is not precisely known, its mass is calculated to be at least 11 times larger than our sun. While it appears as a single star when viewed with the naked eye, Antares is actually a binary star – a system of two stars that orbit closely around each other.

The word Antares comes from the Ancient Greek, meaning ‘rival to Ares’ or ‘opponent to Mars’, named because of its red hue, just like that of the planet Mars.