Although there is a bit of debate over the exact day William Shakespeare (1564–1616) was born (apparently there is a baptism record but not a birth record), the event is normally celebrated on 23 April. He died on the same day 52 years later, 400 years ago.

It is words that we usually associate with Shakespeare: the language of the plays and sonnets, new entrants to the English vocabulary and quotations used daily around the world. We seem to be nearly as enamoured of the characters he created as of the words he gave them to speak. His words have inspired countless works of arts, from paintings to films to music and more.

Many decorative arts objects have been inspired by his work, too. We had a peek into our collection and found a few examples of items that hearken back to the Bard: Royal Doulton series ware, Swedish art glass and British buttons.

Royal Doulton’s Series Ware was designed to offer inexpensive, useful pieces with a wide appeal to collectors. Many of them featured literary and historical characters. The ‘Shakespearean Characters in appropriate settings’ series was introduced in 1912. Both our Royal Doulton Shakespeare vases are from this range. They show Romeo of Romeo and Juliet and Katherine of The Taming of the Shrew. 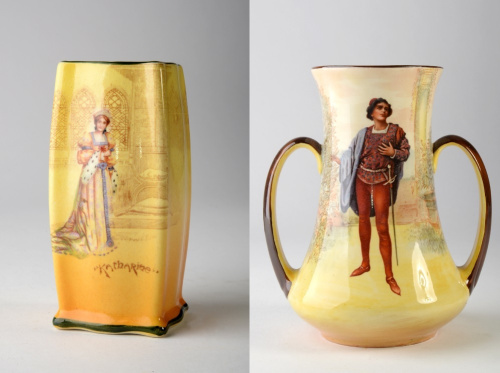 The series seems to have been a popular line. When Mr R B Bell, the senior vice-president of the Ashburton Shakespeare Club announced his engagement in 1914, his fellow Club members presented him with a pair of Royal Doulton Shakespeare vases; his showed Portia of The Merchant of Venice and Falstaff of Henry IV.

Romeo and Juliet was also the inspiration for an early 1950s crystal glass vase made at the Orrefors Glassworks in Sweden. The illustration was inspired by the famous balcony scene from that play, and designed by Nils Landberg. 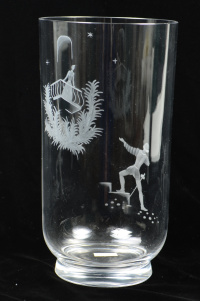 The final item may have the weakest link to Shakespeare, but it vividly illustrates the value of an association with him. This card with 11 linen covered buttons was made by the Birmingham firm of Green & Cadbury.

They are examples of a trademark range advertised as ‘“The Very Button” – Shakespeare’. “The very button” is a small part of a speech by Guildenstern in Hamlet: “Happy in that we are not over-happy. On Fortune’s cap, we are not the very button.” Guildenstern is telling Hamlet that he and his friend Rosencrantz are moderately happy – not, as the button on the cap might have been, at the very peak.

The connection between the product and the reference may be a modest one, but it is probably the best-known quote from Shakespeare that uses the word ‘button’. Shakespeare implies artistry, excellence, innovation and quintessential Englishness; even a set of buttons can be elevated by association with the Bard himself.