Posted 02 May 19 by Merryn Chynoweth

It is said that one man’s trash is another man’s treasure. This could not be more true for the garbage piles left by humans in times long past. Archaeologists call these deposits middens. While the word midden may sound like a euphemistic way to refer to what was, at the time, actual garbage, the word has equally trashy origins. It comes via Middle English from the Old Norse word mydyngja which means "manure pile". [1] While it still has this meaning in modern English, archaeologists use the word to refer specifically to the discarded remains of food preparation and consumption.

Middens can occur anywhere a settlement once existed but are most commonly found on or near the (ancient or modern) coast where they are made up of shells, the bones of fish, birds and mammals, mixed with the ash and charcoal from fires that cooked them. Middens come in all shapes and sizes. Some represent single events, while others are built up over hundreds or thousands of years. Some middens, specifically the Whaleback Midden in Maine, became so massive they were mined by Europeans in the 19th century to produce lime, chicken feed, and fertiliser! [2]

The shell species the midden is composed of tell us about the past environment in the surrounding area; shell species like pipi live in sandy bays while mussels cling to rocky shores. If the shell species change over time, or differ from those found in the area today, we can ask questions about resource management, cultural change, or environmental change. Bivalves (shells with two halves) lay down layers of shell incrementally as they grow. Careful analysis of these growth rings allows archaeologists to work out the season the shells were harvested and to see if there are patterns of seasonal exploitation. [3] In addition to all this useful data that can be gleaned from the shells themselves, the presence of large quantities of shells in dense middens changes the pH balance of the soil or sand they are buried in, which allows small, fragile bones that would normally be quickly degraded or dissolved by acidic substrate to survive. [4] 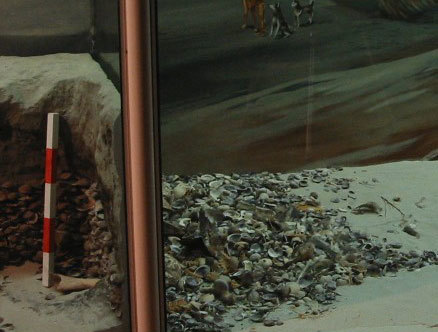 Image: The midden in our Shag River Mouth diorama. Visit Tāngata Whenua for a closer look.

The bones of fish, birds, and mammals are common in middens but often make up a much smaller proportion of the total. By analysing the species of fish present we can learn about past fishing practices – were they targeting fish species that lived close to shore, or venturing further out to deeper water to target different species? Analysis of the ear bones of fish can also be used to determine the season the fish died. [5]

The remains of birds can inform archaeologists about the wider terrestrial environment. Were they forest-dwelling species, ones that preferred more open scrub, or coastal waders? If the remains of extinct species are present they can tell us about their preferred environments. Light can also be shed on the former range of species. Analysis of middens tells us that seals were once found all over New Zealand. [6]

However, reconstructing the past environment through the analysis of terrestrial species can only go so far. To build up a more definitive picture of the environment during the period a midden was produced, we turn to archaeobotanical analysis. The fuel for the fires used for cooking and warmth was sourced from the immediate environment. Discarded seeds as well as bones were thrown into the fire but not all were fully consumed by the flames. Many seeds and burnt fragments of wood survive in a carbonised form. All plant species have a unique cell pattern when examined under the microscope that often allows them to be identified, even when fragmented into small pieces. [7] By identifying the species represented in charcoal, we can build a more complete view of the environment people were living in in the past.

Finally we come to the smallest component of middens, the artefacts. These are usually broken items that ended their days on the trash pile. These could be things as simple as broken fish hooks or as conspicuous as adzes. The debris from producing items like fish hooks could also end up in middens, which in turn sheds light on the manufacturing process and tells us at what point an item would not have been repaired.

Now we can see that a carefully analysed midden gives us a window through which we can look back to the past. Unfortunately this window is in danger of closing. These numerous and important archaeological sites are the most vulnerable to climate change and rising sea levels given their commonly coastal locations. Higher than normal tides and storms can cause sites to erode faster or expose new sites.

All archaeological sites are protected under New Zealand law; it is an offense to interfere with them. If you find a midden eroding, please note the location and contact Heritage New Zealand Pouhere Taonga to report it. Together we can help preserve our past!

Fancy becoming an archaeologist for a day? Come along to the Museum on Saturday 4 May and learn to sort and identify shells, analyse adzes/toki and compare animal bones (including moa). 10am–2pm, Atrium Level 1.

[5] Mellars, P A and M R Wilkinson. “Fish Otoliths as Indicators of Seasonality in Prehistoric Shell Middens: the Evidence from Oronsay (Inner Hebrides)” in Proceedings of the Prehistoric Society 46 (1980) pp.19-44.

Top image: Cross-section of the midden in Tāngata Whenua. Shellfish were a constant and reliable source of food for the people of the Shag River Mouth settlement. Otago Museum.