Some background on this post: the Otago Museum has a monthly show called Otago Museum Diaries on Dunedin TV, hosted by the inimitable Dougal Stevenson. Our staff share objects from the collection and give viewers a sneak peek behind-the-scenes at the Museum. Check it out on Dunedin TV!

Dougal is the best at tripping up our normally unflappable Collection Officer Jamie Metzger during the pre-taping banter, and it’s a treat to watch every time.

When it’s time for our bi-monthly Collections date with Dougal Stevenson, I always find myself in a state of panic about what to take. What’s going to get Dougal salivating? What will look good on camera? What has a great story that wouldn’t normally get to be shared?

As one of the Collection Officers at Otago Museum it is my job to care for the vast and varied Humanities collection. For me, fashion is life, and the Otago Museum Costume and Textile collection is my playground. It’s a dream wardrobe of dress spanning decades, even centuries. Everyone asks me if I spend my days dressing myself up in different costumes from the collection.

Let me put it on the record that while I would love nothing more, ensuring these treasures are around for future generations to appreciate prevents me from playing dress-up as a day job.

This time round was my third time in the hot seat and I was feeling a bit more comfortable. I knew our Living Environments Coordinator Sam Botting was going to slay the segment by bringing a live turtle to the table. I needed to bring something equally fab, so I settled on two Christian Dior by El Jay garments. 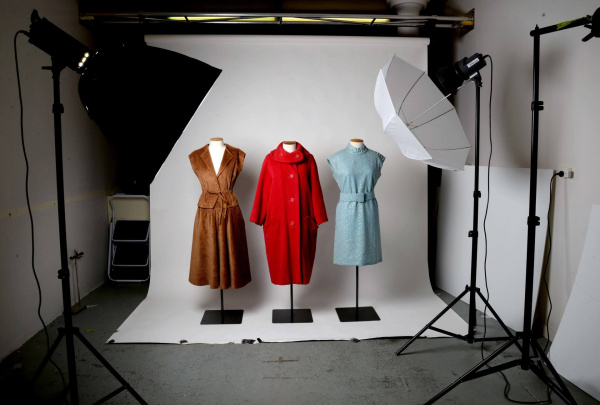 Christian Dior by El Jay garments from the Otago Museum Collection, getting ready for their Dunedin TV closeups

The story of El Jay and the man behind it, Gus Fisher, is a wholly glamorous one. Fisher got into fashion in his early 20s working for the family business founded by his older brother Louis Jacob. In fact, the name of the label was based on his brother’s initials.

The label gained a reputation as a maker of smart outerwear, but didn’t gain momentum until Gus took over the design department in the 1950s.

Each year, Fisher travelled to Paris to be inspired by the latest innovations from the homeland of haute couture. El Jay was a unique label in that it provided the modern New Zealand woman with European elegance. El Jay’s reputation for impeccable workmanship led a fabric supplier to recommend Fisher to Christian Dior, who at the time was looking to expand its brand across the world.

In 1954 El Jay became the New Zealand licensee for Christian Dior, giving them exclusive rights to manufacture Dior originals and prêt-à-porter (ready to wear) garments in the New Zealand market. 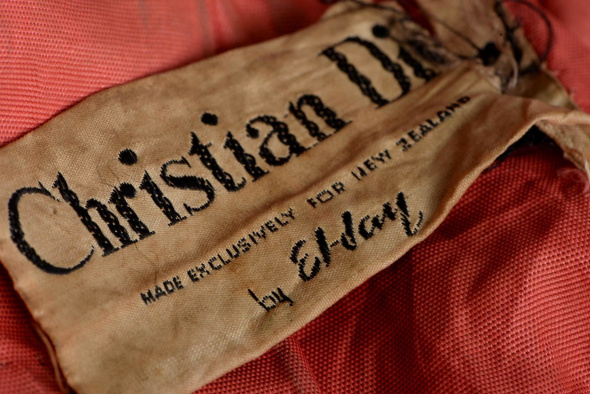 Otago Museum is lucky enough to have examples of Christian Dior by El Jay garments in its collection. The first is this snazzy corduroy jerkin and skirt, donated by the estate of Mrs H Smith in April 1986. The silhouette is clearly a nod to Dior’s infamous ‘New Look’. It exaggerates the feminine shape, nipping in the waist and accentuating the hips. 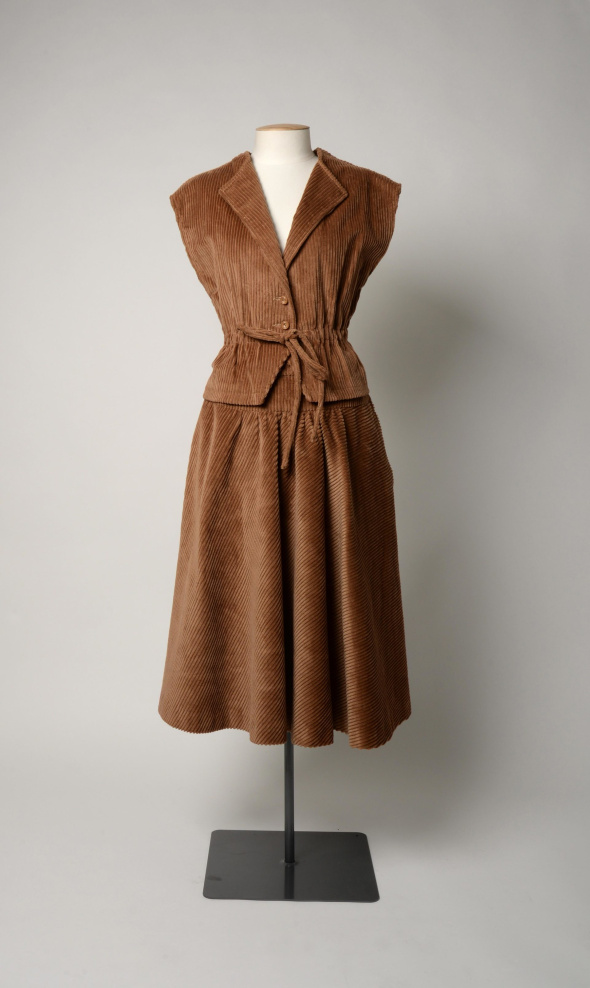 The corduroy fabric updates the characteristic Dior shape and brings it into the 1980s.

It is important to note that all Christian Dior by El Jay clothing were reproductions, not copies. They were made from the original paper patterns and specifications created by Dior in his atelier. In many, cases the exact fabric was used to create the garments. Sometimes a substitute fabric would be approved for use by Dior if the French cloth was too expensive for the New Zealand market.

It is also interesting to know that Fisher modelled his own showrooms on the Christian Dior maison in Paris.

The second garment is this sophisticated pink wool coat donated by Mrs Helen Auld in 1986. Mrs Auld donated this garment to the Otago Museum collection as an acknowledgement of the role that her teacher Rae Vernon at the Otago Home Sciences School played in her family’s life. 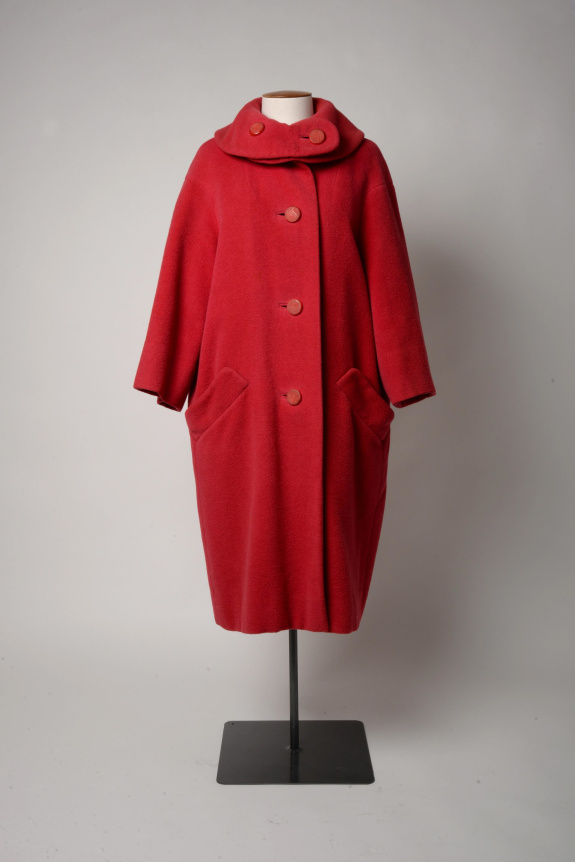 The coat is in impeccable condition. With its simple lines and striking colour, it is still a piece a girl would covet for her wardrobe today.

While Fisher was producing Christian Dior garments, he was simultaneously manufacturing womenswear of his own design under the El Jay label. He was extremely clever in navigating changing markets over the years. The El Jay-licensed Dior garments remained sought-after investment pieces, whilst the ready-to-wear El Jay label responded to international trends, providing something for all tastes and budgets.

I didn’t have enough time to show this little number to Dougal, but the blog is an ideal place to share Museum objects that otherwise wouldn’t get their moment in the spotlight. This pale blue mini, donated to the collection by Mrs Mary Small in 1986, really epitomises the responsive mood of the El Jay label. 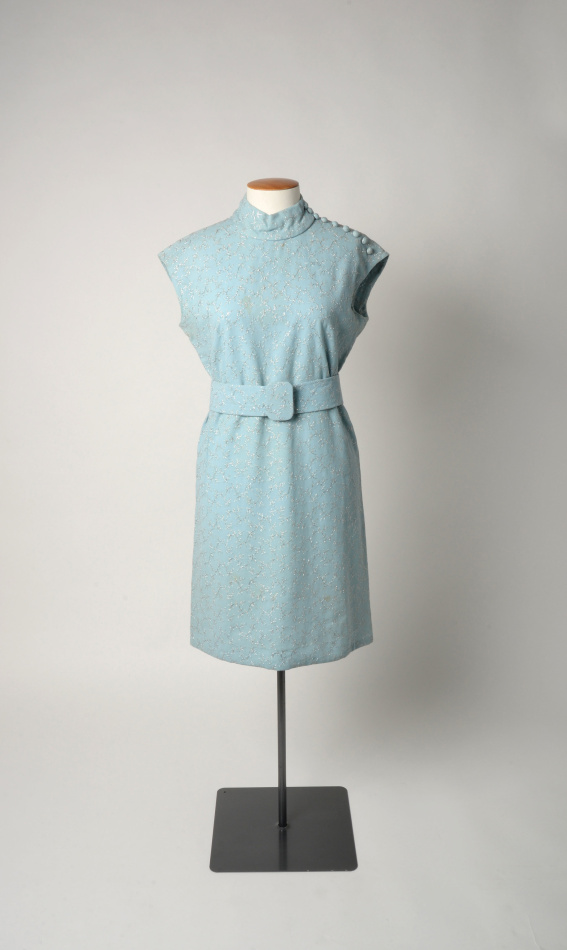 This A-line shift dress is quintessential of the styles of the Swinging ’60s, a time where the ‘Youthquake’ demanded streamlined, ready-to-wear fashions that were nothing to do with the rituals of haute couture. This synthetic crepe dress mimics the styles of straight simple shift dresses that bypass the waist and simply hung to above the knee. The silver lurex thread embroidery gives it a touch of glam, making it an option for a night on the town.

Some detective work indicates the hem has been unpicked at some point, indicating possibly a desire to lengthen the style.

Both the corduroy two-piece and hot pink coat were displayed at the 2010 New Zealand Fashion Museum pop up exhibition Looking Terrific: The story of El Jay at Gus Fisher Gallery in Auckland.  A scaled down version was displayed at long-time stockist of El Jay, Kirkcaldie & Stains, in Wellington later that year. While the exhibition has long since closed its doors, these two garments, alongside a trouser suit from the Otago Museum collection (also displayed at the Looking Terrific exhibition), now live on at the New Zealand Fashion Museum website. The site provides a fantastic digital record of the exhibition.

A legend in the collection

Gus Fisher’s contribution to the New Zealand fashion industry is legendary. He never lost the Dior license, becoming the longest licensee holder in the world. His vision for uncluttered elegance and ability to negotiate change for the women of New Zealand was impressive.

Fisher passed away on the 20 July 2010, three days after the Looking Terrific exhibition closed its doors. It is certainly a privilege for Otago Museum to hold these pieces of New Zealand fashion history in its collection to admire, learn from and lust after.