H and A – The Story of a Medieval Silver Coin

We have a silver Irish groat in our coin collection with the crowned initials H and A on either side of a harp. The H stands for Henry VIII and the A stands for Anne Boleyn. The coin dates from 1534–35. Henry and Anne wed in 1533 and Anne was executed in May 1536. 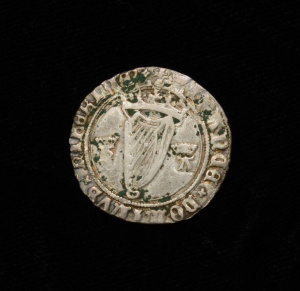 The coin was not worth a great deal when it was in use – about four pennies. It is not large but is linked to tales of immense social and political power. It has survived for over 480 years, while Anne and Henry’s marriage lasted little more than three. Their story has intrigued historians, novelists and film directors.

Anne Boleyn was Henry VIII’s second wife, and their daughter became Queen Elizabeth I of England. Henry’s courtship of Anne began when he was still (inconveniently) married to his first wife, Catherine of Aragon. But they had no son, so Henry had no male heir to the English throne.

Hilary Mantell’s award winning book, Wolf Hall, focused on Henry VIII’s savvy political advisor, Thomas Cromwell, and has reinvigorated our interest in the machinations of his Tudor court. It was Thomas Cromwell who contrived Henry’s divorce from Catherine and his marriage to Anne. Doing so, however, meant a split from the Catholic Church. This led to the establishment of the Church of England, which English monarchs are still the head of today. 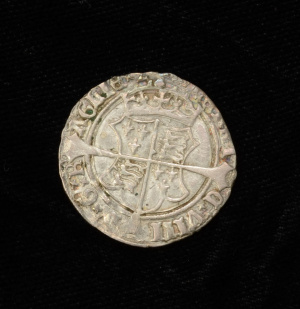 Our groat was donated by Willi Fels, an extraordinarily generous supporter of the Otago Museum. It was part of his personal coin collection. Fels enjoyed the sense of connection coins gave him to the places from which they came and to the individuals depicted on them.

This one also makes me think of other pairs of initials, such as those carved on tree trunks by young lovers. Whatever their relationship was like, Henry’s wooing of Anne Boleyn no doubt involved the romance, exhilaration and lust that surround many affairs. Because of who Henry was, however, there were lives and kingdoms at stake, not just hearts, wealth and position. When Anne appeared unable to give Henry a male heir, her position, too, became precarious. She was charged with adultery and publically beheaded, very soon after which Henry married Jane Seymour, one of her ladies in waiting.