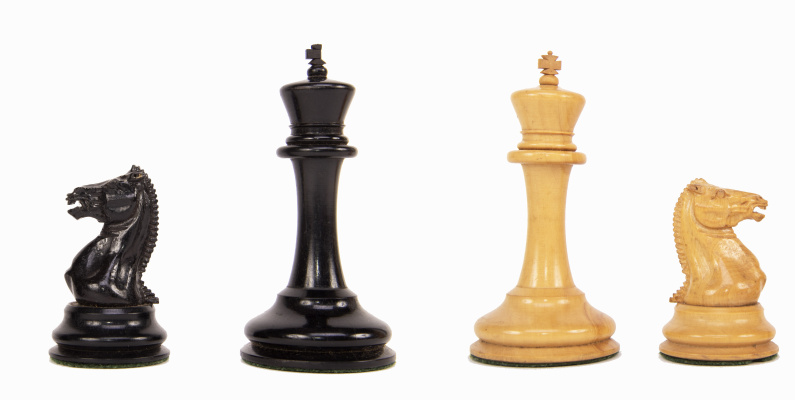 A Radio NZ interview early in the New Year discussing New Zealand’s 129th Chess Congress – played in Christchurch 2 – 12 January – reminded me of the sole chess set in Otago Museum’s collection. It was given to us in 1951 by Gladys Parkinson, then living in Macandrew Bay.

We don’t know if Gladys was a chess player herself or how she came by the set. The entry in the Museum Register merely says “Set of boxwood chessmen, in stamped metal box. "The Staunton Chessmen."

They take their name from Howard Staunton (1810 – 1874), a British chess master who founded the first successful English-language chess magazine – the Chess Player's Chronicle – in 1841, contributed a regular chess column for The Illustrated London News from 1845, and in 1847 wrote The Chess-Player’s Handbook. 1 In 1851, he was involved in organizing the first modern international chess tournament in London.

In the 1840s, amateur and professional chess was becoming an increasingly popular and visible Victorian pastime. There was a rapid rise in writing about the game, and in the number and variety of places where it was played. 2

Staunton did not design the Staunton Chessmen set, although he did promote it – an early celebrity endorsement. It was Nathaniel Cook, the editor of The Illustrated London News, who registered the design at the UK Patent Office on 1 March 1849. Staunton, at the height of his fame, is said to have advertised the set at Cook’s request in his ILN column on 8 September 1849, and it became famous using his name.

Prior to Cook’s design, a variety of different representations of the main playing pieces were in use. Cook used plain and widely recognised symbols for his pieces: a crown with Formeé cross for the King, a coronet for the Queen, a mitre (traditional, ceremonial headdress) for the Bishop, a horse's head for the Knight (based on the heads of horses depicted in carvings from the Parthenon, now in the British Museum), a six-crenelled castle for the Rook, and a ball for the Pawn. All have broad bases, and gracefully contoured stems. 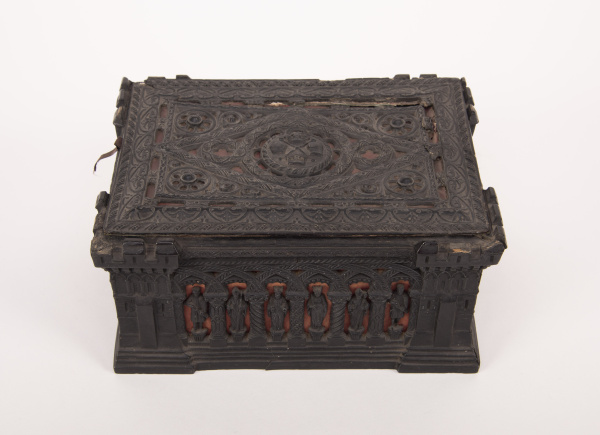 The pieces are housed in a Gothic style carton-pierre (a papier-mâché made to imitate stone or bronze) casket, designed by Joseph L. Williams, with a green label headed ‘The Staunton Chess-men’ on the underside.

Our set was made in London by the firm of John Jaques, now Jaques of London. The company claims to be the oldest games company and sports manufacturer in the world. 3 Jaques was also Nathaniel Cook’s brother-in-law.

Base of piece showing part of the Jaques London mark

Collector and researcher Frank Camaratta has generously dated the Museum’s chessmen and casket to circa 1852 – 1853. In his article ‘On Collecting Staunton Chessmen’ he wrote, “If you are looking for a set of antique Staunton chessmen to enhance your collection, there are chessmen produced by Jaques of London and then there are the rest.” 4

A number of (sometimes short-lived) organisations for chess playing were formed in Dunedin in the 19th century. A meeting at the Provincial Hotel of “gentlemen interested in the formation of a chess club and in the organization of a chess tournament” was advertised in September 1863, 5 with the paper suggesting “the revival of interest in this noble game [was] occasioned by the dedication to it of a portion of our columns”. Another for “Gentlemen who are desirous of forming a Chess Club in connection with the Athenaeum” met at Wain's Hotel, Manse street, in 1867. 6 The Otago Chess Club – still in existence – was established in Dunedin in 1875.

We can be sure some Otago players used Staunton chessmen. In February 1896 Joseph Mellor’s weekly ‘Over the chessboard’ column in the Evening Star came down firmly in their favour: “The Staunton chess men quite eclipse older patterns in grace and solidity, and if amateurs would only use them with club size boards they would train the eye and mind to finer purpose”. 7

But we would love to know exactly who trained their eye and mind using the Museum’s set.