Have you got the blue fly blues?

home > Otago Museum Blog > Have you got the blue fly blues? 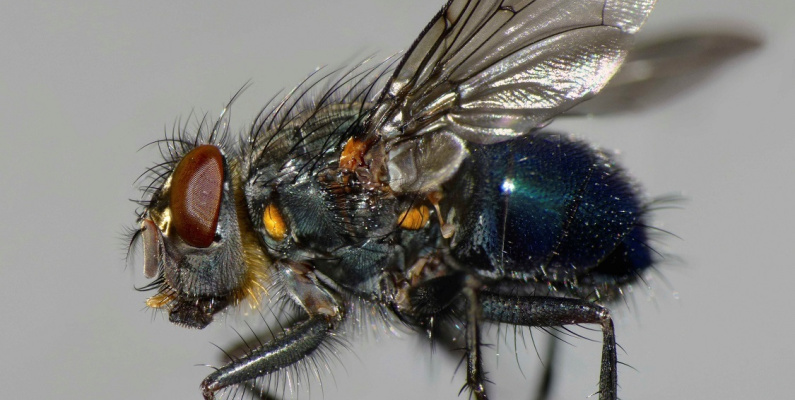 In New Zealand alone, there are approximately 2500 species of fly that have been formally described and named.  In addition, it is estimated there may be as many as 2000 more awaiting description.  That’s a lot of flies.

Flies (order Diptera, meaning ‘two wings’) are grouped into families, and then further grouped into genus and species.  These groupings are generally based on gross and microscopic differences, and many of them can be differentiated at a glance.  But many others are not so easy to distinguish, and the differences can be quite subtle.  Which brings us back to the topic here.  Why so many blue flies, and how can they be distinguished?

The three groups that contain the majority of large blue flies are the families Calliphoridae (the blow flies), Tachinidae (the bristle flies) and Muscidae (the house lies).  Others can be seen in a few other families and we’ll get to those shortly.

The purpose of this short piece is to introduce the New Zealand blue flies and to give a handy guide as to how to tell them apart with the naked eye. Photos of these species are included to facilitate comparisons, but a quick search on the iNaturalist-NZ website will bring up many more. So, let’s get cracking.

The family Calliphoridae holds the majority of large, dark, blue-tailed flies. By far the most common is the European blue bottlefly, Calliphora vicina.  It’s a cosmopolitan species (meaning found worldwide) and is readily seen on a daily basis in any urban garden here in New Zealand, almost year-round.  C. vicina is relatively large (about 1 to 1.3 cm) with a medium gray thorax (mid-section) with thin black stripes, and a bright metallic blue abdomen (tail section) that is said to have a ‘tessellated’ appearance.  Tessellated means having a tile-like appearance, and in shifting light, or from different angles, the abdomen looks as if it is covered with many small overlapping silver, black, and blue tiles; this in fact is the one feature which will ID this fly at a glance. The three photos below show an example of this. 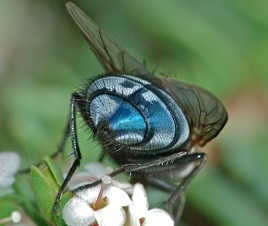 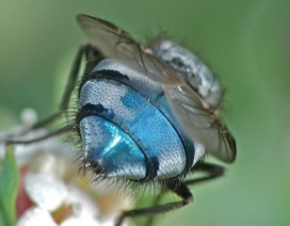 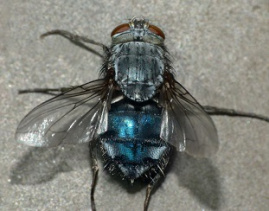 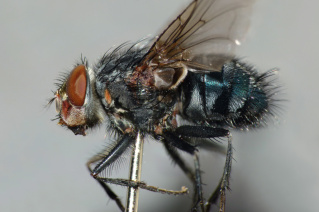 Another common New Zealand blue fly is the magnificent New Zealand blue blowfly (Calliphora quadrimaculata).  I say magnificent because it is large, sometimes really large (approaching 2 cm) and its abdomen is a shiny dark metallic royal blue.  It is fairly common in forests and glades, often seen resting in the sun on tree trunks and on the leaves of trailside shrubs. 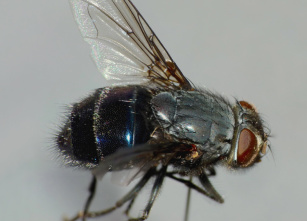 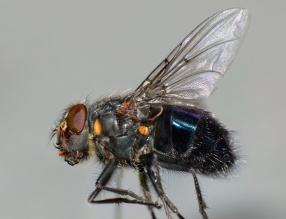 In addition to the distinctive solid metallic blue abdomen, C. quadrimaculata has a pair of distinctive bright orange-yellow spiracles (breathing pores) on the side of its thorax.  For a better look at this stunning fly have a look at some close-up images here

Now things get a bit tricky.  The family Calliphoridae has two other flies that look similar to both C. vicina and C. quadrimaculata.  The differences are subtle and difficult to establish with the naked eye or in the field.

The first of these lookalikes is a small group of flies in the genus Xenocalliphora.  Several of these have bright blue abdomens (either glossy or tessellated with a silvery dusting) and they all have large, bright yellow-orange spiracles.  In addition, the genus Xenocalliphora can be distinguished from all other New Zealand Calliphoridae by their yellow palpi (small antenna-like mouth parts or ‘feelers’) and the presence of numerous long glossy black bristles on the top of the head. 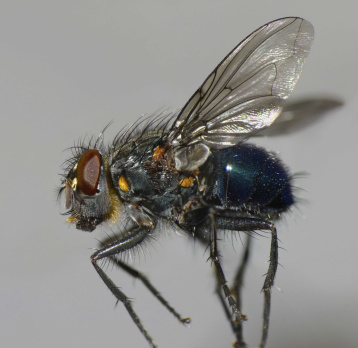 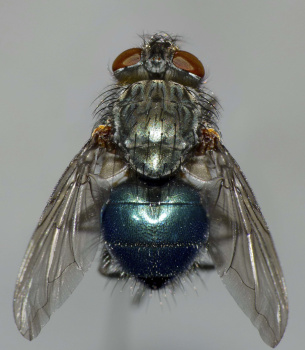 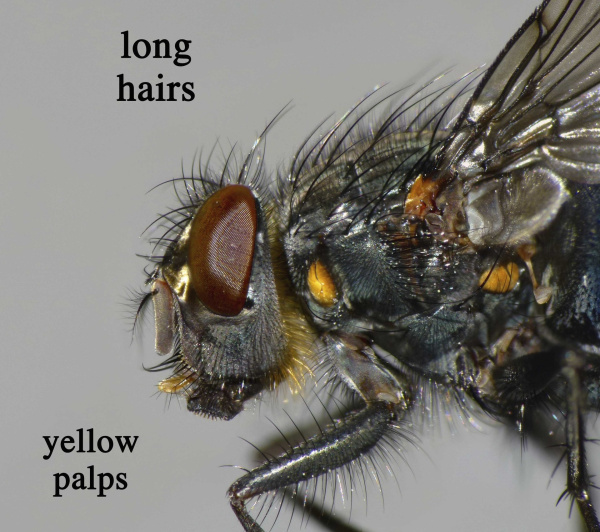 Image: Ventral, dorsal and a close up of the head showing the long hairs and yellow palps of Xenocalliphora sp. (Calliphoridae) - 8 mm

The eleven recognised species in the genus Xenocalliphora are not uncommon, but seldom noticed.  They tend to be small to medium in size (7 – 9 mm) and are seen in a wide variety of locations including coastal forests and glades, on beaches, and among stands of flax along lake margins (have a look around Tomahawk Lagoon).

The second blue fly look-alike in the family Calliphoridae is the genus Ptilonesia.  There is but a single species in this genus, Ptilonesia auronotata, and it is closely related to Xenocalliphora (Ptilonesia was once considered a sub-genus of Xenocalliphora).  It is abundant on beaches and large numbers can be seen on the seashore intertidal zone between Brighton and Taieri Mouth.  Ptilonesia auronotata can be distinguished from all Xenocalliphora by the densely haired eyes, and black palpi.  You may also notice that the hairs on the top of the head are short and sparse (see images below). 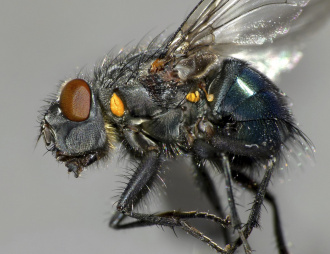 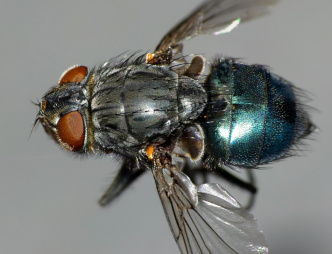 This brings us to a new family: Tachinidae, the bristle flies.  The bristle flies, as their name suggests, sport long spiky erect bristles on their abdomens.  In addition, they often have long, sometimes striking antennae.  There are almost 200 described species in the family Tachinidae here in New Zealand.  For a good look at the range and diversity of the Tachinids, visit here

As you may have guessed by now, some of the Tachinids are blue!  And as is often the case, they follow the same basic pattern seen in the Calliphorids; they exhibit grey and sometimes delicately striped thoraxes and metallic blue abdomens.

A couple of good examples are shown below. They are quite similar in overall appearance to Calliphora vicina, are rather uncommon, and often overlooked in the field.

The best ways to distinguish them requires a close examination of the antennae and wing veins. 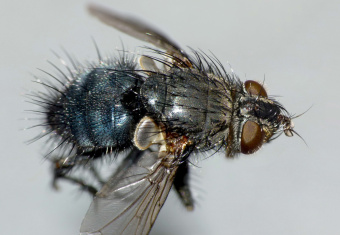 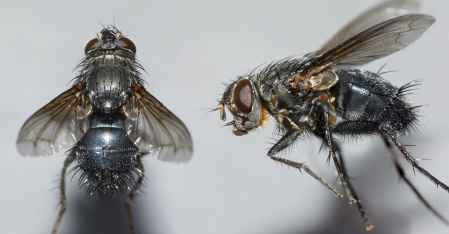 One of the commonest and most striking of the blue Tachinids is Pales marginata.  It was first described by the eminent Otago entomologist (and former Otago Museum curator) Captain FW Hutton.  Pales marginata (originally Phorocera marginata) can be found throughout New Zealand in a range of habitats.

The thorax is often a bright blue-green with several narrow black stripes anteriorly and a blue-green ‘scutellum’ (the shield-shaped structure at the base of the thorax).  The scutellum generally exhibits a brown margin (see above).  Another reliable distinguishing feature for all species in the genus Pales is the presence of very long antennae which, in the field, often stick straight out (see below). 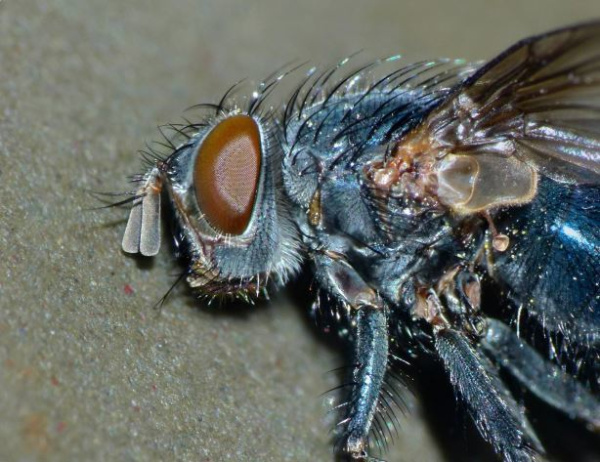 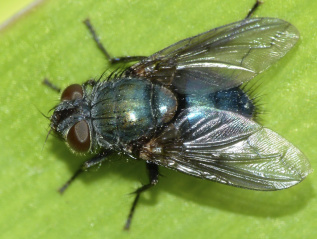 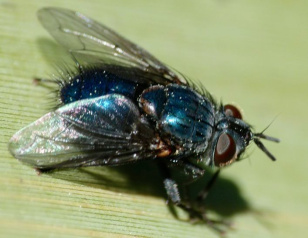 Images: Close up of the head of Pales marginata (Tachinidae) and two photos of it in the field showing the long antennae which can stick straight out. 7 mm

Not to be outdone, the family Muscidae (house flies) boasts a few blue flies as well.

Here in New Zealand, seventeen genera containing 145 species have been recognised in the family Muscidae.  A small number are blue or at least bluish in colour and deserve mention here.

One of the most striking of these is Calliphoroides antennatis, so named because when first described in 1881, Hutton wrongly assigned it to the family Calliphoridae.  By 1930, Malloch had recognised and moved the species into the family Muscidae.

Although Hutton listed it as rare, it is actually fairly common around Dunedin (they can be seen in reasonable numbers at Fraser’s Gully and along the trail from Bethune’s Gully up to Mt. Cargill).  The fly can be easily distinguished, even by naked eye in the field, by its bright orange antennae and smoky dark wings.  In addition, close inspection reveals consistently orange ‘knees’ and a yellow spot at the wing base (see below). 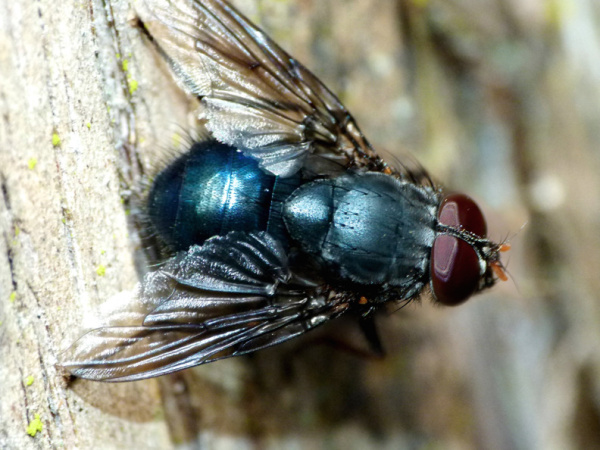 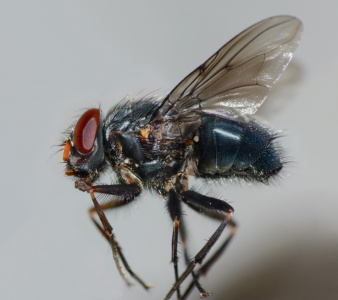 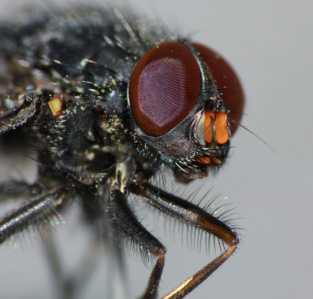 Images: Dorsal, ventral and close up of the head of Calliphoroides antennatis (Muscidae),10 mm

Another blue Muscid is quite common on the beaches around Dunedin (Tomahawk Beach is ideal).  It is fairly large and a bluish-grey in colour.  Microscopic examination confirms it belongs in the genus Spilogona, but it has yet to be formally described and is nameless (although I like to call it the blue beach muscid).  The fly can be observed resting on piles kelp on the foreshore and can be easily confused with Calliphora vicina. 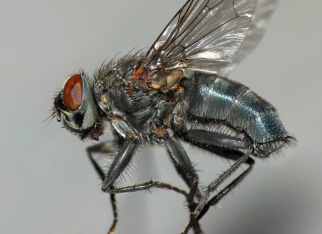 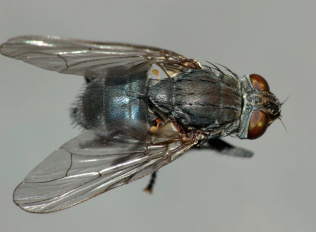 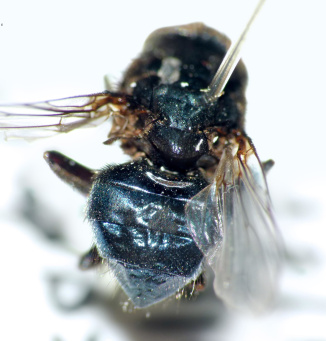 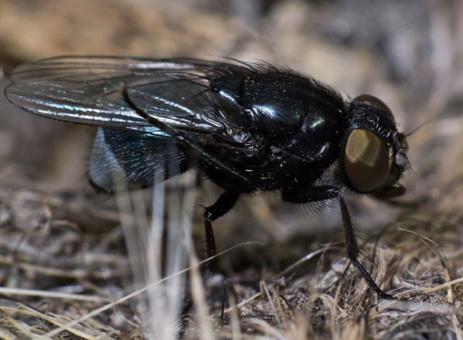 One final blue Muscid is Australophyra rostrata (the black carrion fly, formerly known as Hydrotea rostrata).  The fly is found throughout Australia and first appeared in New Zealand at least 100 years ago.  Apparently, it is still rather uncommon, although Otago Museum does have several specimens, collected in the Invercargill area in 1990.  Pont (1973) noted that the fly is generally glossy black with a blue abdomen, although the Otago Museum specimens are a brighter blue all over, suggesting a bit of genetic drift over the many years that it has been here.

Two last groups are shown below: one in the family Polleniidae and the other in Syrphidae.  The family Polleniidae is interesting because, until just this year, all of the flies in this family (genus Pollenia, 35 species total) were considered to be part of the family Calliphoridae. After decades of debate, a recent phylogenetic analysis by Cerretti et al. (2019) resolved the issue, and a whole new family was erected.  Several of the New Zealand flies in the genus Pollenia have grey striped thoraxes and metallic blue abdomens, and look very much like small versions of C. vicina.  The distinguishing features for Pollenia generally require microscopic examination, and I refer the interested readers here to Dear (1985) for a good treatment of the subject 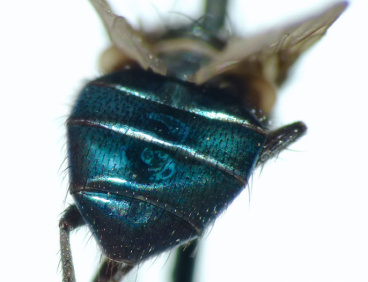 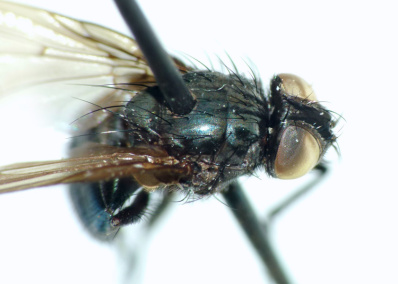 In contrast, the one blue fly in the family Syrphidae (Helophilus hochstetteri, shown below) is quite easy to spot and distinguish in the field, even from a fair distance. Like all flies in Syrphidae (the ‘hover flies’), Helophilus hochstetteri can hover over flowers and hold perfectly motionless like a humming bird.  Its glaringly brilliant metallic blue abdomen shines like a jewel in the sun.  It is quite common around Dunedin and can be seen visiting flowers in most any urban garden or field. 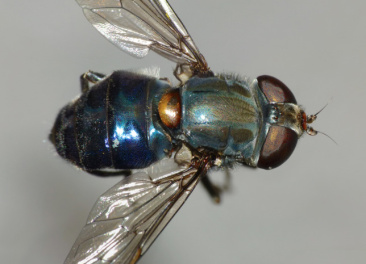 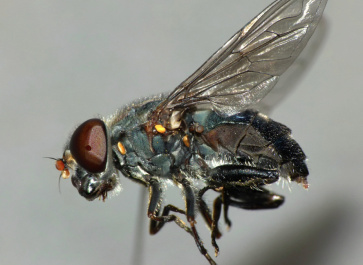 One has to wonder why so many flies in so many different families exhibit these seemingly constant colour patterns.  The obvious assumption is that grey and black striped thoraxes and metallic blue abdomens impart some evolutionary advantage to the species.  Perhaps at some time in the ancient past, a fly with these colours proved to be utterly unpalatable to other animals that might feed on it, and then over the eons other flies adopted these same patterns as a means of protection.  Such a thing has been proposed for the viceroy butterfly in North America, which perfectly mimics the bitter tasting (or so I’ve heard) monarch butterfly.

Of course, all of this is conjecture.  It may be that we’ll never know.  But there’s no denying that some of these flies are quite beautiful and special in their own ways, and the wardrobe they’ve chosen is certainly popular!

All images are Copyright of Steve Kerr (CC-BY 4.0) except where noted