The Mystery of the Adzebill

home > Otago Museum Blog > The Mystery of the Adzebill 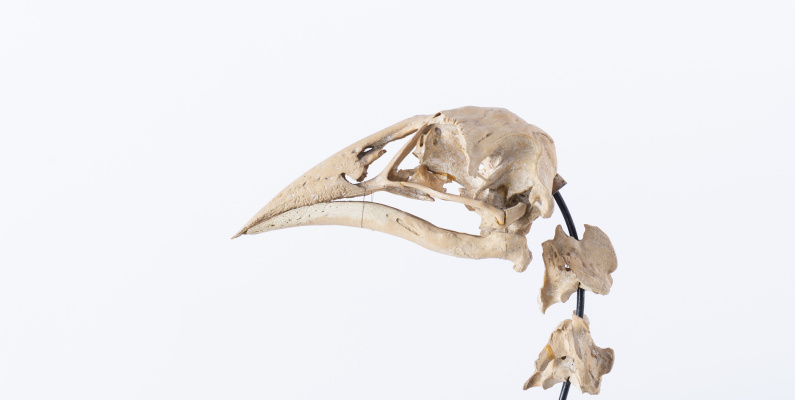 On display in the Southern Lands, Southern People gallery is an extinct bird with a mysterious history. This bird is not very well known by the public of New Zealand and its past is being uncovered slowly. This bird is the adzebill, an endemic bird that stood at about 80 cm tall.  It had a long, thick downward-curving, axe-like bill coupled with a very large and robust skull, stout thick leg bones, and small reduced wings that would not have been visible in the feathered bird. It had a small sternum and a reduced, almost non-existent keel that shows that it had been a long time since the adzebill, as a species, had last flown.

There were two species of adzebill in New Zealand – the North Island (Aptornis otidiformis) and the South Island (Aptornis defossor). There is also a third, much older species that has only been found in the early Miocene fossil fauna at St Bathans which is 19 – 16 million years old.

Image: Historic image of the South Island adzebill deposited by Augustus Hamilton in 1892 to Otago Museum that is on display in the Southern Lands, Southern People gallery. Photographer unknown, no known copyright restrictions.

The adzebill is about the same size as a small moa species, as which, coincidentally, it was first scientifically mistaken for by Sir Richard Owen in 1844. Sir Owen was the anatomist and paleo-biologist who first formally described the moa, and coined the term ‘dinosaur’.

Later, the adzebill was suspected, through morphometrics, to be more closely related to the rails family of birds like the flightless New Caledonian kagu and the sun bitterns. More recent genetic work, done in 2019, by a team of international researchers, including paleontologists and ornithologists from both Australia and New Zealand, extracted traces of ancient DNA from the fossilised bones of the adzebill. This work has uncovered another piece of the past of the mysterious adzebill.

According to the genetic evidence, the adzebill is related to a small family of birds called Sarothruridae or flufftails. This family of birds currently contains 11 living species, and the species that is the closest living relative is the Madagascan flufftail (Sarothrura insularis) which is endemic to Madagascar. This small bird only weighs 50 grams, whereas the adzebill could weigh up to 19 kg.

Flufftails are small birds that are distributed across Africa and with two species in Madagascar. This begs the question, how did the adzebill come to be in New Zealand? From the DNA found in the bones and modern samples from flufftails, researchers have estimated that the adzebill began its split from the flufftails 40 million years ago. This was during the middle of the Eocene period and, during this time, the southern continents were closer to together, Antarctica still had forest, and the Southern Alps of New Zealand had not yet formed as we know them today. The majority of the South Island of New Zealand which sits upon the Pacific plate was east of the north western parts of the South Island. The climate was still fairly warm during this period, but, over the next few million years, things would become progressively cooler.

Image: Reconstruction of New Zealand 40 million years ago during the mid-Eocene period when the ancestor to the adzebills is believed to have split from the fluff tail. Black lines on the map illustrate the coastline of modern-day New Zealand. Image provided by and copyright of Dominic Strogen, GNS Science.

The ancestors of the adzebill would have been able to fly and likely would have flown from Africa, spread across Antarctica, and then arrived in New Zealand. The New Zealand and African members of this family of birds are likely at the extreme ends of its range.

Even the diet of the adzebill has been a mystery. Richard Owen theorised in 1871 that ”the peculiarities of the skull in Aptornis may be considered in relation to the food of the bird and the work to which its long adze-like beak was put. I infer this work to have involved frequent strong and deep thrusts into the ground, and that the quest was for animal, not vegetable matters.” It was thought by Owen and others that the bird was predatory and may have tried to excavate large earth worms and it is not implausible that the adzebill would be able to excavate other animals too like the tuatara or small seabirds.

Recent stable isotope analysis, which can tell if the bird ate plants, animals, or a mixture of both, has shown that the adzebills had a high trophic position within the ecosystem; they were terrestrial predators. Smaller gizzard stones than expected for a bird have been found by researchers near a skeleton of an adzebill. This provides further evidence that the bird didn’t eat plants. Birds use gizzard stones in their crop to help break down food and those that eat plants have larger gizzard stones than those who do not. This means that, as Owen predicted, the adzebill was a predator and was well adapted for life in dry podocarp forests where it lived.

The adzebill was extinct before European settlement and colonialisation of New Zealand but bones of the birds have been found in middens that indicates that the early Māori hunted and ate the adzebill, and it is likely that hunting that led to the extinction of these two species.

Richard Owen, "On Dinornis (Part XV.): containing a description of the skull, femur, tibia, fibula and metatarsus of Aptornis defossor, Owen, from near Oamaru, Middle Island, New Zealand; with additional observations on Aptornis otidiformis, on Notornis mantelli, and on Dinornis curtus", Transactions of the Zoological Society of London, vol.7 (1871): pp.353-380.