Researcher Insights: Q & A with Lorraine Wong and Zhen Huang

Among the Museum’s fantastically varied collections are items from New Zealand missionaries in China who were supported by the congregation of Knox Church in Dunedin. Some came to us directly from individuals; some from the Church.

They include written documents that bear witness to the missionaries’ attempts to learn the Chinese language; examples of material used to promote Christianity; and hints about the connections they formed in their new communities.

While the Chinese calligraphy is an instant message that these texts come from elsewhere, without a translation of at least part of their content, we were unable to identify the nature of most of this material – what it said, did, or was used for.

Fortunately, two skilled, fluent and patient scholars – Dr Lorraine Wong and Ms Zhen Huang – very generously offered to help us. Already they have identified two pass documents that were issued to Alexander Don. Don was appointed leader of the Presbyterian Church of Otago and Southland’s mission to the Chinese in 1879. He spent over a year in Canton with the American Presbyterian Mission, then came to Dunedin in 1881. He returned to Canton in preparation for the establishment of the Canton Villages Mission in the 1890s.

I am a Lecturer in Chinese Studies at the University of Otago. Prior to coming to Dunedin, I studied comparative literature and global Chinese studies at New York University. Having taught in Hong Kong, mainland China and New York, I am interested in East-West cultural exchanges and the roles different languages play in these exchanges.

Tell us about your visit

I am very pleased to have the chance to work with Moira and Zhen identifying a set of historical materials about Alexander Don and the cross-cultural religious connection between China and New Zealand, and to see how the ordinary folk in 19th and early 20th century China left traces in New Zealand.

What are you enjoying about your research?

Aside from helping the Museum catalogue the materials related to Alexander Don and possibly other early New Zealand missionaries to China, I am excited about tracing the interactions of New Zealand Christian missionaries with the commoners in China who spoke different non-Mandarin languages.

I work on script reforms and language politics in the Chinese national context and beyond. It was exciting to discover, among the materials we are working on with Moira, some pamphlets promoting a Chinese phonetic alphabet created at the turn of the 20th century. You get a sense of how far the campaigns for phonetic writing in China could go in a war-ridden situation. I am also inspired by the courage and commitment of New Zealand Christian missionaries at that time.

Why do you love humanities?

I love humanities because I am intrigued by different kinds of human intellectual, emotional, and sensuous experiences that are articulated in literary and non-literary means. 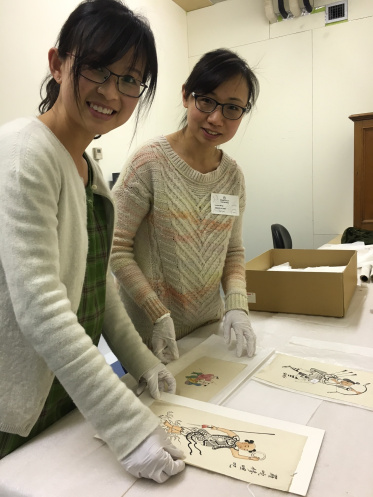 they have identified the figures of Xue Dingshan, who is aiming a bow at the sky, and Nezha, a Taoist deity.

Tell us about your research

It is my pleasure to be a volunteer with Lorraine working on the collection items that are related to Chinese language and culture in New Zealand. Also, it is intriguing to see some Chinese traditional cultural artefacts dating from the 19th and early 20th centuries at the Otago Museum, for example, the traditional Chinese painting, ‘Crossing the river on one reed’.

What do you hope to achieve from your visit?

I am hoping to build more connections between China and New Zealand. Identifying and translating Museum collection materials that are China-related gives me new ideas about teaching Chinese language and culture in New Zealand. It is interesting to see that the Museum has two pairs of shoes used in the past by Chinese women with bound feet. I think it is a good idea to make use of local China-related materials to teach Chinese language and culture.

Why do you love humanities?

I love humanities because I am so proud to be a cultural ambassador to introduce our country's culture to others. I also really enjoy teaching Chinese language to foreign students and telling them how amazing the Chinese culture is.