Posted 22 May 17 by Isobel Andrewartha 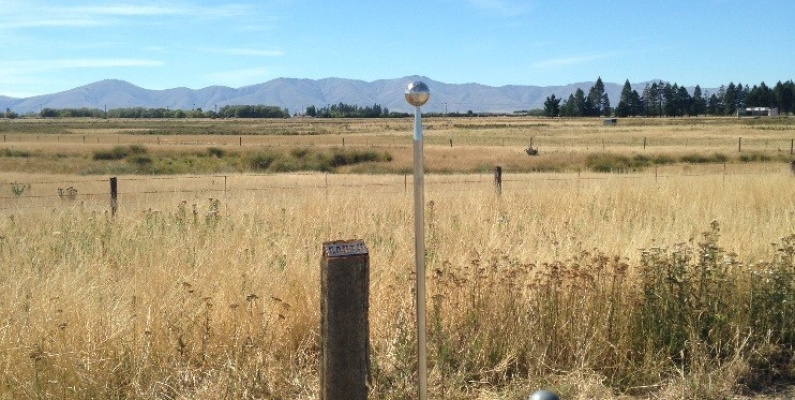 Our solar system is vast and really hard to visualise. Representations of planets are always out of scale, with the planets placed far too close together. To recreate the solar system to scale, you need room – and lots of it.

In 2016, the Otago Museum’s Science Engagement Team and the Otago Central Rail Trail Trust, funded by Curious Minds and supported by the Dodd-Walls Centre, set out to represent our solar system on a 100-million-to-one scale. Welcome to New Zealand’s first interplanetary cycleway!

Central Otago was the perfect space to put us in our place – our place in the universe!

The project was conceived by Otago local, Ian Begg, and came to fruition in early 2017. With the sun in Ranfurly, a mini solar system (including Pluto) stretches all the way to Clyde.

Scale-modelling the sun posed the largest problem because of its size. Even at 100 million to one, it has a diameter of 14 metres! A large sculptural work in the middle of Ranfurly was unfeasible, yet it was important to be visible from the Rail Trail. A spark of inspiration brought a solution — a solar outline mapped by yellow fences.

Ranfurly is a great place to start your journey. You’ll be going uphill (slightly) to start with – but no one ever said interplanetary travel was going to be easy! 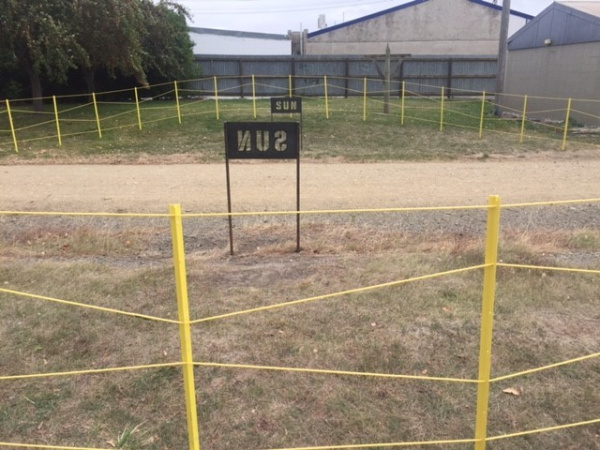 From the sun at Ranfurly, it’s an easy stroll to the first planet of the solar system – Mercury – a mere 580 metres away. To represent the very smallest planets, a globe structure would have been lost against the magnificence of the Otago scenery. Instead, negative space was opted for, to emphasise their miniscule nature. 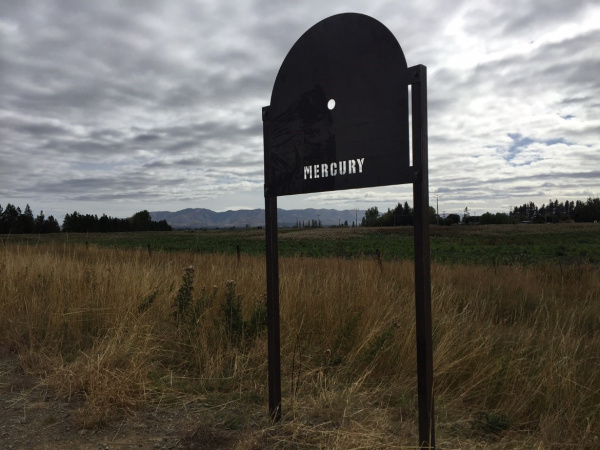 I’ve always remembered the planets’ order using a mnemonic from childhood: My Very Ernest Maid Just Swept Up Nine Pins – though, since then, the pins have been demoted to dwarf pins. But for now, we have reached Very! It’s Venus. Made of solid steel, Venus is powder-coated a toxic-looking mottled orange to reflect its dangerous nature. Any humans ever to visit this deadly planet would be killed instantaneously by a number of factors. It’s hot on Venus – 400 degrees Celsius day and night. It’s poisonous too, with an atmosphere full of sulphuric acid, which due to its weight, would crush us to pancakes if we landed on the surface. And finally, the surface is covered in volcanoes! 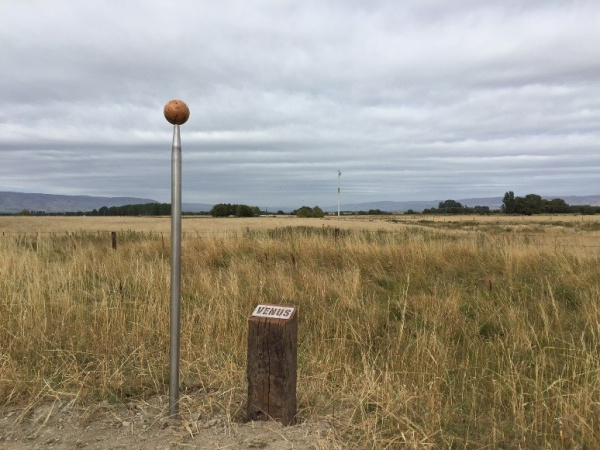 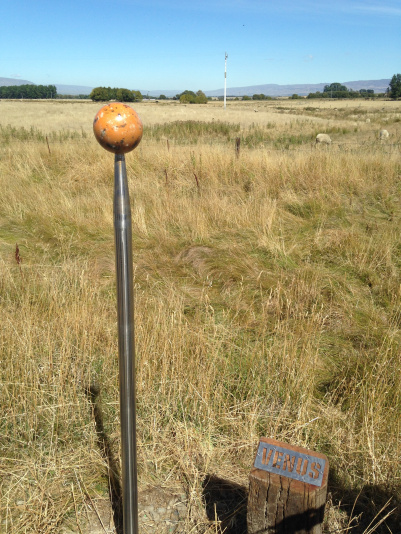 And so we travel on, further and further through the solar system, next arriving at our own home planet. On reaching Earth, you have travelled 1.5 km from the sun, or in space, 149.6 million kilometres. The Earth has been crafted from stainless steel and engraved so it gleams, jewel-like under the Central Otago sun.

Our moon conveniently sits just 3.84 metres away. If you time your visit for just after breakfast in late March or September, you’ll be able to witness the Interplanetary Cycle Trail’s very own lunar eclipse! Watch the shadow of the Earth track over that of the Moon on the Eclipse Shadow Board. 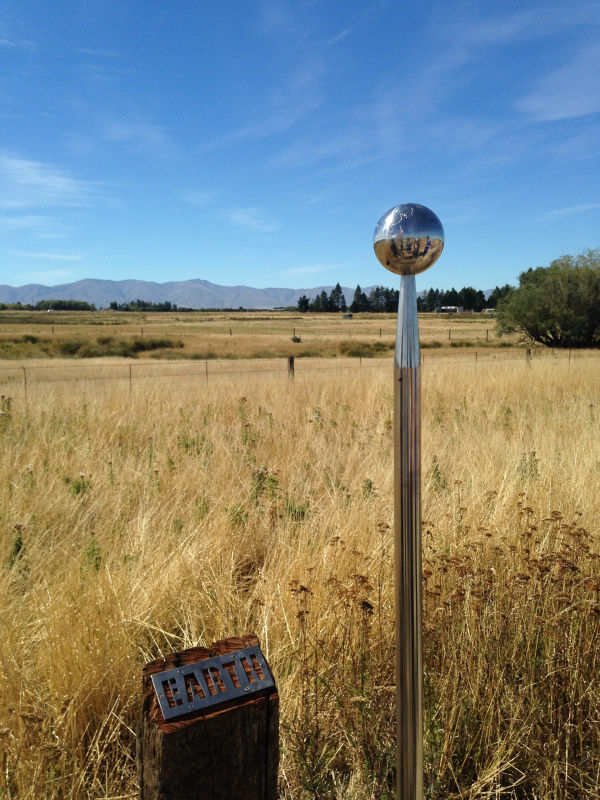 Now we reach the last of the terrestrial planets – Mars. As the planet humans are most likely to visit next, Mars has been a subject of fascination since ancient times. Its distinct red colour connected it to the god of war. We imagined extra-terrestrials living there, and now NASA has plans to land humans on its surface by 2030. This means that the first humans to visit Mars have already been born! But you can now get there under your own steam, just a mere 2.28 km out of Ranfurly! 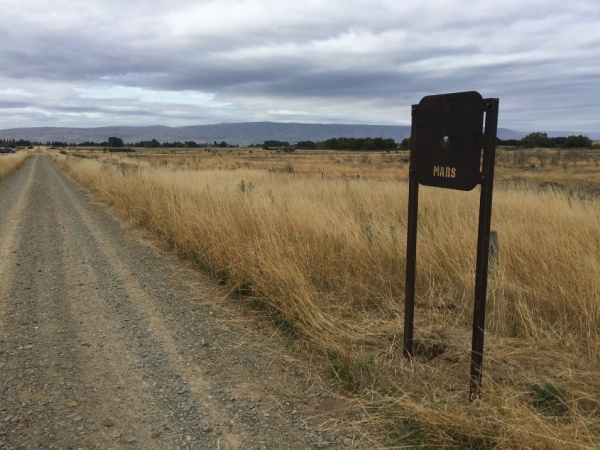 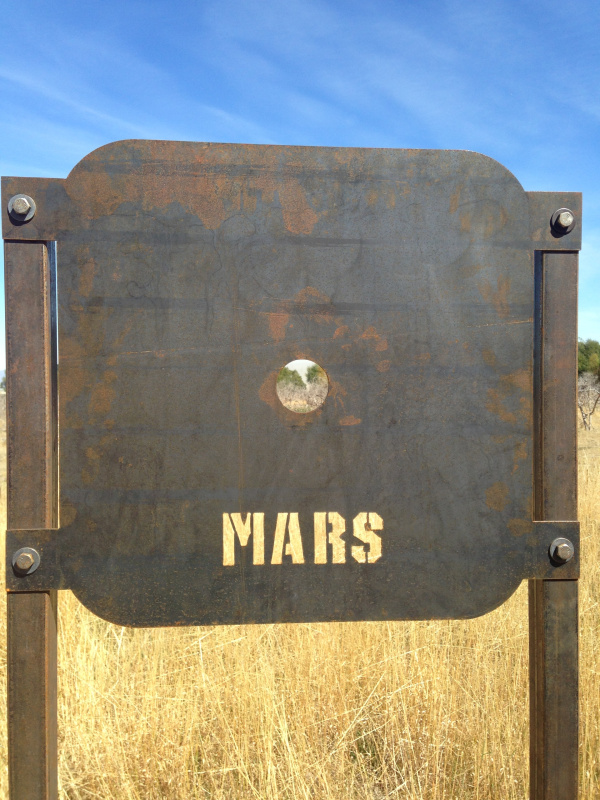 Having left the terrestrial planets behind, we are entering the truly vast realms of space. To travel to Jupiter, you have to nearly triple the distance you have already travelled. As the crow flies you’d ride 7.78 km, but since the rail trail is a winding beast you must go much further!

Once this epic planet is in view, you are more than half way to Wedderburn. Sculpted using barbed wire, this Jupiter is a stark reminder of the hazards of our gas giants – although made of insubstantial gases, they can still be very dangerous. 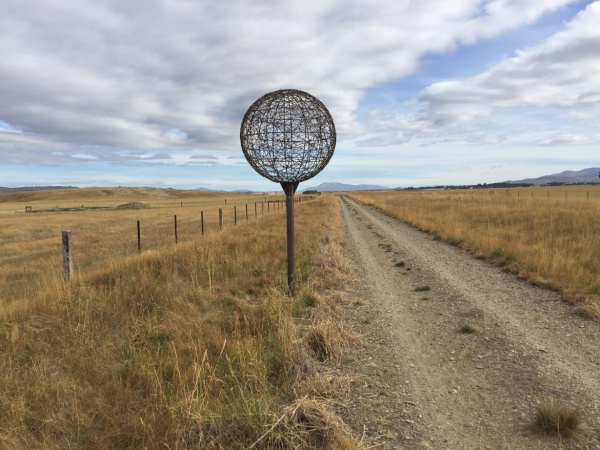 Saturn, a baby version of Jupiter, is past your first pit stop at Wedderburn. And happily, you are almost at the highest point of the Rail Trail – it is all downhill from here! Since leaving Jupiter we have almost doubled the size of the solar system. Saturn is 14.25 km from Ranfurly – a great half-day ride. 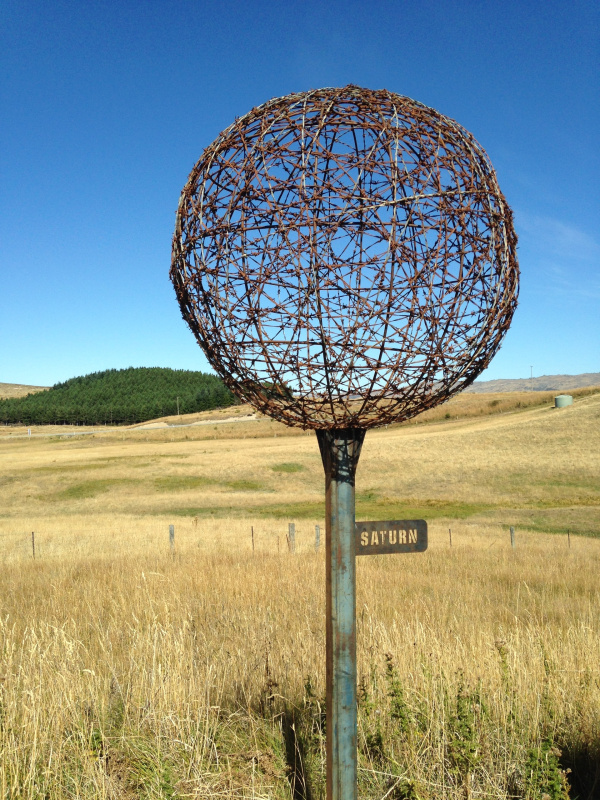 Now we are well beyond the safety of the rocky planets. To explore the outer regions of our solar system by bike, perhaps set aside more than one day! The so-called ice giants, Uranus and Neptune, will take significantly more time to reach.

Uranus, the *butt* of many jokes, has the coldest planetary atmosphere in the solar system with up to 900 km per hour wind speeds and a minimum temperature of -224° C. Neptune too is very very cold, and may be the windiest planet, with winds whipping through the clouds at more than 2 000 km per hour.

Should you go all the way to Neptune, you may meet the creator of our scale replica solar system, Ian Begg. 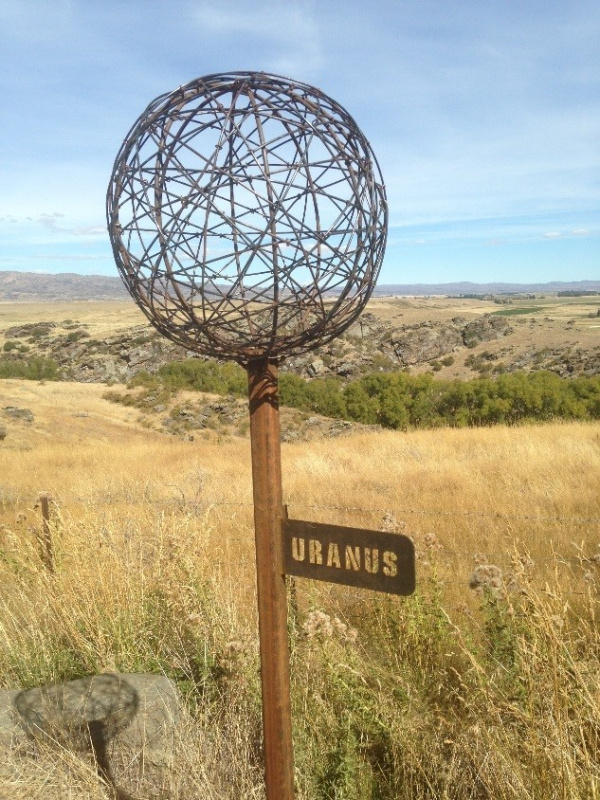 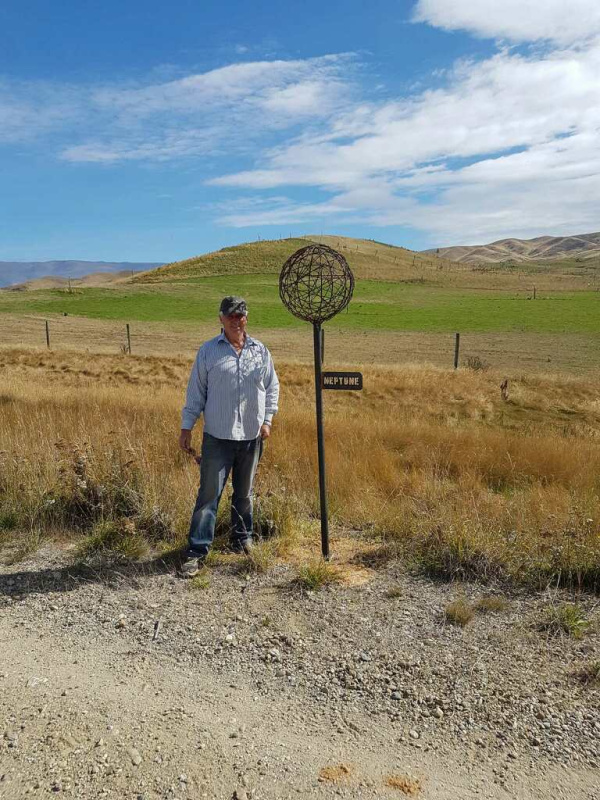 Now we are almost at the end of the Rail Trail; Clyde is just around the intergalactic corner, less than 20 km away! If you’ve ridden since Ranfurly, you’ve now covered more than 90 km on Earth, or 90 billion kilometres in space.

And as the end is in sight, so is Pluto. No longer considered a planet, but rather a dwarf planet, Pluto still holds a place in humanity’s heart. Downgraded in 2006 because of its size, Pluto was closely examined in 2015 by the New Horizons mission which discovered a geologically active world; not the lifeless rock they expected. 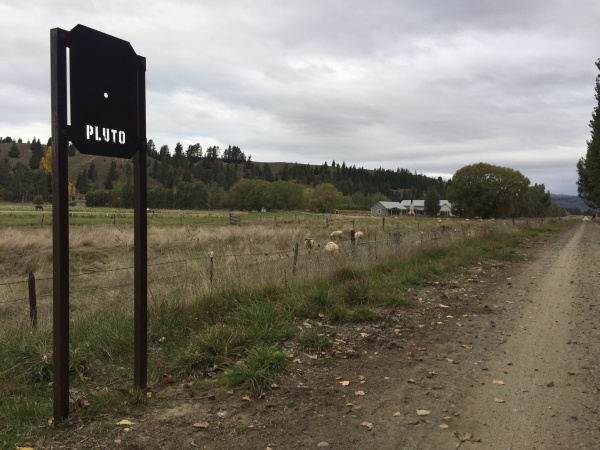 While Pluto represents the end of our journey, the system continues. Beyond Pluto is the Kuiper Belt, home to not only Pluto but other dwarf planets like Eris and Makemake. Finally, the Solar System ends in a wide theoretical area called the Oort Cloud, which is 1.87 light years away, and where the farthest comets seem to originate from.

This brings us to the end of our travels together, and completes of our solar system sojourn. It’s been quite a ride!