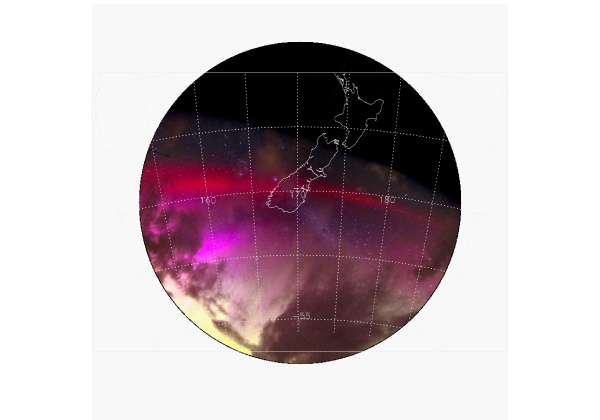 It is the first-ever direct observation of rare auroral activity (an auroral-like arc transformation) that may cast new light on the complex magnetic interactions in the near-Earth space environment.

“Because this kind of transformation has never been recorded before, we’ve come away with some interesting measurements that can’t be explained by current scientific theories and models,” Dr Griffin says.

Photographed in the skies above Dunedin on St Patrick’s Day, 2015 by Dr Griffin, the auroral activity to the south was accompanied by an overhead broad red arc, known to researchers as a Stable Auroral Red (SAR) arc. This arc evolved into a thin white-mauve arc, otherwise known as Strong Thermal Emission Velocity Enhancement (STEVE). Although these two arcs may resemble aurora, they are not produced by the same physical process.

Dr Griffin happened to be photographing the activity in Brighton at the time when he noticed something strange.

“There was something weird happening overhead – which is unusual for New Zealand, as the auroras are usually low down in the sky. I got curious and pulled out a really wide fisheye lens to start a timelapse.”

The video Dr Griffin captured, along with data from satellites and from an all-sky imager located at the Mount John Observatory, 200 km north of Dunedin, form the basis of the paper, which was co-authored by an international team including scientists from Boston University, NASA’s Goddard Space Flight Centre, and the University of Calgary.

Dr Griffin posted his observations on his YouTube channel where they were seen in 2018 by Auroral Scientist Dr Bea Gallardo-Lacourt from NASA’s Goddard Space Flight Centre. She contacted Dr Griffin who sent his observations to be used by a team of Space Physics experts led by Research Professor Carlos Martinis from the Centre for Space Physics in the Astronomy Department at Boston University.

The collaboration led to a paper which has just been published in Geophysical Research Letters, entitled “Rainbow of the Night: First Direct Observation of a SAR arc evolving into STEVE”: a reference to the name given to the aurora by Kāi Tahu: Ngā Kahukura ō Hine nui te Po (Rainbow of the Goddess of the Night).

“Since the discovery of STEVE, the help and collaboration provided by citizen scientists has been critical to our research. Their dedication and passion for chasing the aurora and related phenomena provided us with an incredible set of data. I never thought my work would involve such a rich connection to this community and the beauty provided by their photographs,” says Dr Gallardo-Lacourt.

“These observations highlight the benefits of merging two communities, citizen scientists and researchers, to help discover new connections in geospace. Without Ian’s photographs, this study would not have been possible,” says Professor Martinis.

“The results reveal the fast evolution of some of the strongest plasma properties ever measured in the Earth’s upper atmosphere,” he added.

David Hutchinson, director of the Dodd-Walls Centre for Photonic and Quantum Technologies, says this auroral-like arc was a brilliant example of nature putting on a show.

“Physicists love to smash atoms together and see what happens, but we usually have to build things like the Hadron Collider at CERN in Switzerland.

“In this case, nature did all the hard work for us by creating the auroral displays in the atmosphere. Understanding the processes responsible for these optical phenomena is key to uncovering the fundamental science, and how the interaction between gases and plasma at different altitudes dominate the atmospheric chemistry.”

Dr Griffin has more than 30 years’ experience both as a space researcher specialising in aurora, and leading observatories and planetariums across the world. Otago Museum has the largest science centre in the country, with an educational outreach team that works nationwide.

“From the moment my parents first took me to the Science Museum in London, I was hooked on learning. Although none of my immediate family had graduated from high school, that single visit to a museum inspired me to find out more about the world,” he says.

“It set me on a lifelong journey that has fostered a curiosity that still drives my passion for learning. It was a pleasure and a privilege to work alongside a team of researchers to see uncover the secrets of these auroral displays.”

You can read “Rainbow of the Night: First Direct Observation of a SAR arc evolving into STEVE” in full online.

For more information or to arrange an interview, contact:

About the Otago Museum:

Established in 1868, Tūhura Otago Museum has 1.5 million items and taoka in eight free galleries and world-class collections. We are a key New Zealand hub for science engagement, and operate the largest science centre in the country with 45 interactive exhibits including an indoor tropical forest with hundreds of rainforest butterflies. The Museum is home to the only 3D planetarium in Australasia; and we employ the largest science outreach team delivering science communication to communities around New Zealand and the Pacific.

The Dodd-Walls Centre research focuses around photonics, the manipulation of light at the most fundamental, quantum level, and the control and manipulation of matter at the atomic scale, through the use of light. The centre aims to produce the next generation of light sources for scientific and industrial applications and harness the quantum world of atomic physics for the new wave of quantum technology

The Dodd-Walls Centre is a national Centre of Research Excellence (CoRE) involving six New Zealand universities, hosted by the University of Otago. The Dodd Walls Centre has over 200 members, approximately half of whom are research students.