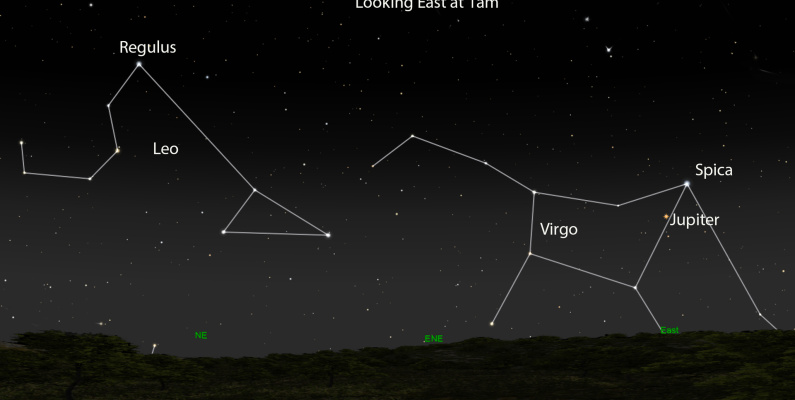 Last Tuesday, clear sky in Dunedin found me in my garden taking pictures of remote nebulae through my telescope. As my camera clicked away, the long ten- minute exposures allowed me time to sit in a comfortable deckchair and enjoy the simple pleasure of exploring the sky overhead using binoculars. After a long run of bad weather it was an absolute delight to spend time stargazing.

Just after 1.30am, my eyes were drawn to a very bright yellow-white object rising behind the trees that encircle my garden. The planet Jupiter was rising.

For the next few weeks, Jupiter is close to the bright blue-white star Spica in the constellation of Virgo the Virgin. If you have a good view of the eastern horizon, Spica rises at around 11.30pm this week, with Jupiter rising roughly half an hour later.

Although Jupiter and Spica appear close together in the sky, this is just a line-of-sight effect. They are actually separated by a vast cosmic void. Travelling at the speed of light (three hundred thousand kilometres per second), the light you see when looking at Jupiter left the planet just over forty minutes earlier. By comparison, light from Spica has taken over two hundred and fifty years to reach your eyes.

If you point a telescope at Jupiter you will find that it is absolutely fascinating. Even a small telescope shows dark bands in the planet’s atmosphere, while larger telescopes reveal incredible features like the Great Red Spot, a storm that’s been raging for over 400 years. The nightly changing pattern of Jupiter’s major moons Io, Europa, Ganymede and Callisto, is also worth studying, especially when one of the moons or its shadow crosses the disc of Jupiter. If you want to see the shadow of one of Jupiter’s moons, you are in luck, because this week the shadow of Europa crosses Jupiter’s disc between 1.24am and 3.36am on the morning of 6 February. Look for a jet-black spot on the bright disc of the planet. 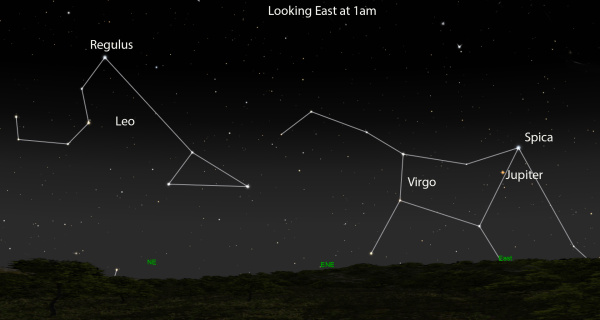