Constellation of the Month: Coma Berenices 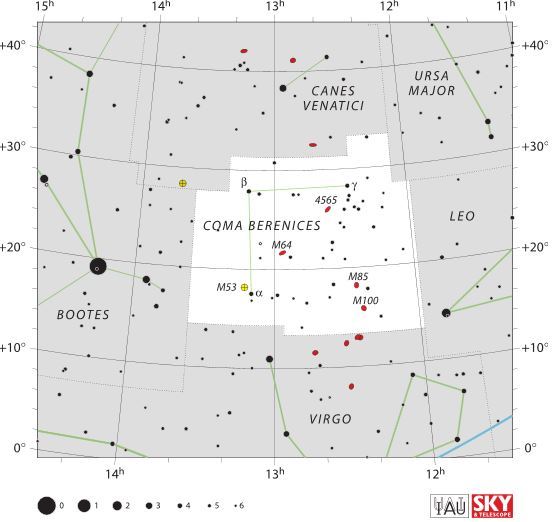 Coma Berenices is seen just below Virgo. It rose around midnight on 2 April and will be visible most of winter, until it sets in late July (around 11pm). Coma Berenices was originally an ancient asterism, and was recognised as an official constellation in 1603.

The best way to find Coma Berenices is to locate either Leo or Virgo. Coma Berenices occupies the space between your chosen Zodiac and the star Arcturus in Boötes (approximately).

What is Coma Berenices? Let me tell you about a girl. Her name was Berenice IIand she lived between 267 BC and 221 BC. She was a beautiful princess who married Ptolemy III of Egypt.

Being a queen at that time she bore many children, and for the most part, that is the only recorded information about her. But there is one great myth surrounding her.

Ptolemy went off to Syria to fight people that weren’t his subjects. So Berenice prayed to Aphrodite for his safe return. Indeed, she went as far as cutting off her hair, and leaving it at the shrine as an offering.

The next day Berenice returned to the shrine to find her hair gone, *gasp*. Luckily her court astronomer, Conon of Samos, was on hand. He explained that her hair had been taken by the gods and placed into the sky. Looking up that night he showed her the stars, made of her hair. Coma is Latin for hair, thus Coma Berenices.

Alpha Comae Berenices (the ‘first’ star in the constellation) is called Diadem, which is a kind of crown or tiara.

So here we have the Hair of Berenice. The stars within are not very bright, mostly fourth magnitude. However, thanks to its location near Virgo, Coma Berenices has an abundance of deep space objects. In the direction of the constellation Virgo is the Virgo Supercluster, which includes our Local Cluster, so there are many excellent objects nearby.

Coma Berenices is also the location of the Galactic North Pole – which is, simply, ‘up’ in the galaxy. I have always said that Sagittarius has the galactic centre in it, and this is still true. But ‘upwards’ is through Coma Berenices. So if the galaxy were a plate with Earth sitting on the edge of it, then Sagittarius would be towards the centre of the plate; and Coma Berenices would be above the plate from our point of view where the metaphoric fork might be…

above it, at the top is Coma Berenices | Two Micron All Sky Survey (2MASS)|NASA and NSF|Public domain

Now let’s look at what you can find in Coma Berenices!

Twenty-four million light years away from us lies a glorious galaxy. Observable through a small telescope, this is the Black Eye Galaxy (M64), also known as the Sleeping Beauty Galaxy or the Evil Eye Galaxy. It’s a popular deep space object for astronomers because of its clarity through even reasonably priced telescopes.

The Black Eye Galaxy is my favourite deep space object in Coma Berenices. But there are lots more.

This collage shows others you can see: