There are many deep sea creatures that have evolved extreme adaptations in order to live in the high-pressure, and cold environment of the ocean floor. Arthropods were one of the first groups of animals to thrive in the deep oceans, protected by their hard exoskeletons.

The Japanese Spider Crab is part of the decapod order, and is the largest species of crab in the world, growing larger than four metres wide when measured from claw to claw. This species is a type of decorator crab, which collects objects in their environment, such as sponges, to put on their shells for camouflage or protection. Our specimen in Animal Attic was collected in 1900 and presented to Otago Museum by Harold Balk. The species is occurs on the sea floor down to 600 metres deep. 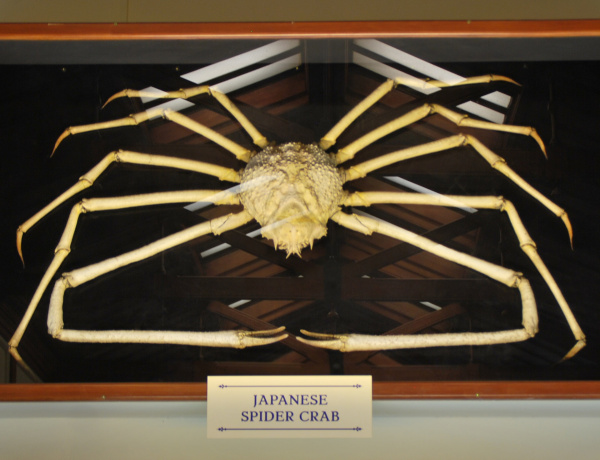 In the deep-sea environment, the last photons of sunlight are filtered out at a depth of approximately 1000 metres with about 99% of light absorbed in the top 150 metres of water. Animals that live any deeper are in constant and nearly absolute darkness, apart from the biological light (bioluminescence) emitted by the animals themselves.

Deep-sea lobsters like the blind lobster (Pentacheles validus) of the decapod order, evolved to have no eyes at all. They are only very remotely related to the true lobster and are currently represented by fewer than 40 species worldwide. More species are known as fossils that date as far back as 230 million years and this group is so unique that they are classified in their own infraorder Polychelida. Specimens of this species have been collected from depths ranging from 1110 to 2360 metres from all around New Zealand, southern Australia, the Gulf of Mexico, and the east coast of South Africa.

Deep-sea isopods can look very similar to fossil trilobites, but they are not related. New Zealand has four endemic species of these isopods, called serolids. The Ceratoserolis isopod on display is found in the freezing waters around Antarctica from 270 to 3200 metres deep.

Deeper still, there are supergiant amphipods (Alicella gigantea) growing up to 34 centimetres long which dwarf most other species which tend to be sized less than one centimetre. NIWA only has seven specimens of supergiant amphipod, so the specimen displayed is a rare sight.

Video footage of the animals, as well as fish and shrimps, visiting a bait trap showed fierce competition, as a ‘food fall’ is rare at these depths. Cannibalism among deep-sea amphipods has also been reported but their large body size and strong exoskeleton reduces the risk of being eaten, and makes them a top predator. This species can be found in the North Atlantic, and the North and Southwest Pacific, from 5285 to 7000 metres deep.

Image: Supergiant amphipod (Alicella gigantea) drawing by Édouard Chevreux (1846–1931) in his scientific description of the species in 1899. Public Domain