A Tour of the Deep South

home > Otago Museum Blog > A Tour of the Deep South 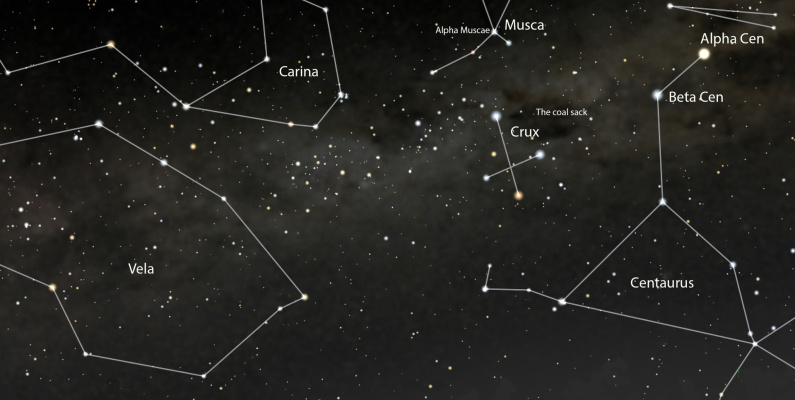 The moon is new next Monday (31 October) at 6.40am, which means we are entering the part of the month known as ‘dark of the moon’. Of course with the nights getting shorter in the run up to the summer solstice, the amount of darkness is decreasing with each passing day, but with the sun setting just before 8.30pm and rising at around 6.15am, Otago skywatchers still get to enjoy almost ten hours of stargazing this week.

With this in mind, I encourage you to explore some of the fascinating constellations in the southern sky this time of year. To get the best views you will need to find yourself a comfortable spot with a good view to the south, well away from city lights.

The familiar ‘pointer’ stars, Alpha and Beta Centauri will be the first stars you see in this part of the sky once the sun has set, with the distinct pattern of Crux, the Southern Cross, slowly appearing as the sky darkens. Crux is very low in the sky at this time, and in fact, if you head out just before midnight you will see the smallest constellation in the sky at its lowest point, hanging due south with the long axis of the cross aligned vertically.

If you draw an imaginary line upwards from Crux, the first star you come to is the brightest star in another cross-shaped constellation called Musca (The Fly). From a dark location Musca is easy to make out, although it can be hard to see from light-polluted sites.

Interestingly, Musca is a relatively modern invention; it was one of the twelve constellations first ‘imagined’ by the Dutch astronomer Petrus Plancius from observations made by the explorers sailing on the first Dutch trading expedition, to the East Indies.

To the east of Musca are the large constellations of Carina (The Keel) and Vela (The Sail) which until the 18th century were part of a much larger constellation called Argo Navis (the ship Argo). 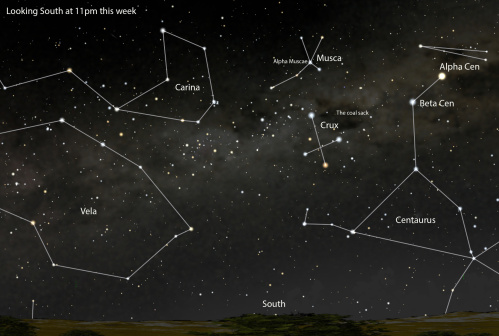