In honour of World Penguin Day (25 April), we’re thrilled to have this guest post about moulting penguins from Trudi Webster, Conservation Science Advisor at the Yellow-eyed Penguin Trust. Plus, it gives us an excuse to link to this year-round favourite. Visit the Otago Museum's Nature galleries or Animal Attic to learn more about penguins. 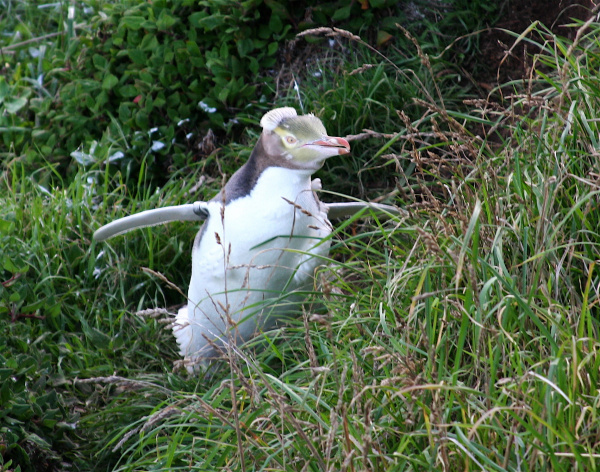 Out with the old, in with the new

Over time a penguin’s feathers wear and break. Daily activities such as preening, swimming, landing on the beach after a day at sea or rubbing against bushes at a nest site cause feathers to deteriorate. To restore these feathers, penguins go through a moult – old feathers are pushed out and replaced by new ones. Penguins often look a bit scruffy during the moult as their old feathers fall out in patches. So if you see a penguin looking down-on-its-luck, don’t judge it too harshly – it might just be moulting!

Penguin feathers are highly specialized. They are essential for keeping it warm and dry while swimming in the cold ocean, and have developed to be short, broad and closely spaced, to trap air against the skin.

Penguins lose their insulating and waterproofing capabilities while moulting, so they must stay out of the water. It takes yellow-eyed penguins about three to four weeks to replace their feathers each year. Since they can’t go fishing without the the full complement of feathers, they need to increase their food intake before moulting begins to sustain them while they are stuck on land.

It takes a lot of energy to build new feathers. Penguins typically time their moults to avoid periods of high energy demands, such as the breeding season. The most common moulting time is just after breeding, when food is still plentiful but chicks no longer need to be fed. Juvenile and non-breeding yellow-eyed penguins moult first, starting in late February. Yellow-eyed penguin parents start moulting in March, which gives them a few weeks of time to recover and put on weight after breeding.

How to treat a moulting penguin

Moulting can be a stressful and dangerous time for birds. Their energy levels are low and starvation is a possibility if they have not managed to put on enough weight. Birds are more susceptible to predators and disturbance, and the missing feathers compromise their insulation and protection from cold or rain.

If you see a moulting penguin, you can help by giving it a wide berth and keeping dogs on a leash. If you find a distressed or injured penguin, or someone harassing a penguin, contact the Department of Conservation on 0800 362 468.