Watch for a close approach of Venus and Neptune 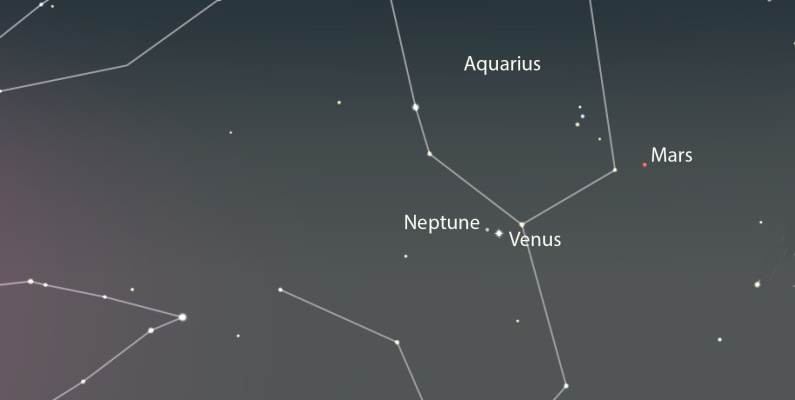 I mentioned recently how readers who had access to binoculars or a telescope could spot Neptune, when it was relatively close to the planet Mars. If you missed out on the chance to observe Neptune on that occasion, have I got a deal for you! If you’ve never seen the outermost planet, then the next few days offer an almost unparalleled opportunity to find it easily when it makes a very close approach to the bright planet Venus in the evening sky. To find Neptune, you will need a good pair of binoculars, or better still, a small telescope.

Venus, the second planet from the sun, is easy to spot. Once the sun has set, it’s pretty much impossible to miss with thick, highly reflective clouds making it appear incredibly bright when viewed from Earth. If you do have a telescope and point it towards Venus, you will be able to see that this week it’s roughly half illuminated, and resembles the moon at first quarter phase.

For Otago stargazers, the evening of Friday 13th January certainly won’t be unlucky. On that night Neptune is just over half a degree (that’s the diameter of the full moon in the sky) above and to the left of Venus. Put another way, if Venus were at the centre of a clock face, then Neptune would be a moon’s width away at roughly the ten o’clock position. With small telescopes, and certainly with binoculars, it should be possible to observe both planets in the same field of view.

Again with binoculars or a small telescope, Neptune’s azure blue colour should make it stand out against the background stars, and help you identify it. The planet’s distinctive colour is a consequence of methane in Neptune's upper atmosphere absorbing the red light but reflecting the blue light from the sun back into space.

While Venus appears much brighter than Neptune, it is of course much closer to us. On Friday, Neptune will be just over 4.4 billion kilometres away, which is just over 44 times more distant from us than Venus. 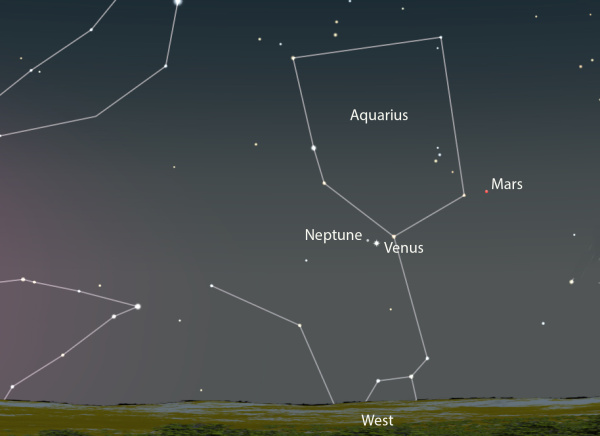