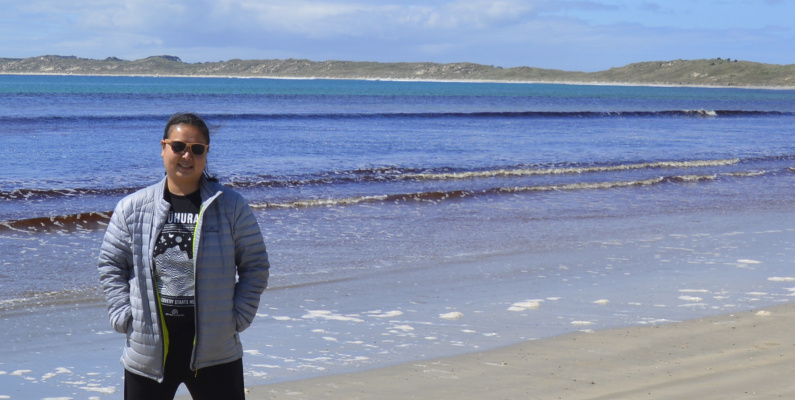 The sea around Rēkohu is rich and abundant. It is easy to spot the signs of diverse coastal life along the foreshore between high and low tide. On the sandy beach at Waitangi Bay, I have encountered beach cast remains of snails, mussels, clams, crabs, fish, jellies, birds, and a whale. If you flip a pile of wracked kelp, you find hundreds of amphipods feeding or burrowing into the damp sand. Life on foreshore habitats like beaches and rocky shores come with challenges. You are entering a world that spends half of its day in the surf and the other half exposed to sun, wind, and intruders like myself. Each habitat offers interesting opportunities for naturalists to see the diversity of coastal species and consider how they adapt to these challenges - without having to go for a swim.

In this blog, I will share some of the shells that I have noticed in my beachcombing and tide pooling adventures on Rēkohu and what I have found out about their history, biology, and impact on people. 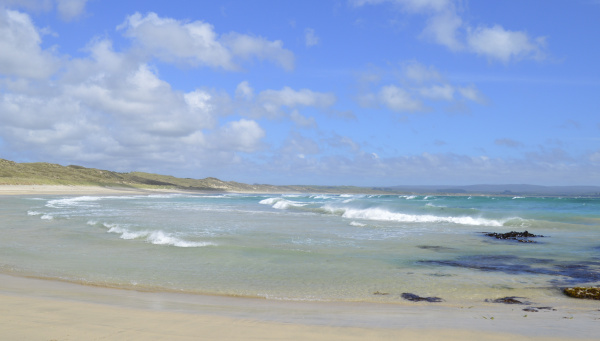 Sea shells have fascinated people throughout history. Many have engaged in collecting and describing shells, which form an important part of many museum collections. Working with the marine invertebrate collections at the Otago Museum has given me some experience identifying New Zealand’s sea shells using amazing resources like nzshells.net.nz and mollusca.co.nz. These websites provide excellent photographs to compare the features and shapes of different species and show the different ‘forms’ or colour variations within each. There are over 3660 different species of molluscs recorded in New Zealand, so today I will focus on a few of the common marine gastropods found on Rēkohu.

Common marine gastropods found on Rēkohu include snails and limpets that mostly eat seaweeds or algae found on the surface of rocks; and they range in size from small pebbles to larger than your hand.  Gastropods are invertebrate animals characterised by their muscular foot that sits behind the mouth and below their stomach, and it is worth noting that not all gastropods make shells (i.e., slugs). Shells of many species were collected from Rēkohu and named by scientists over 100 years ago and are displayed in many museums throughout New Zealand and the world, including at Otago Museum’s Animal Attic gallery. 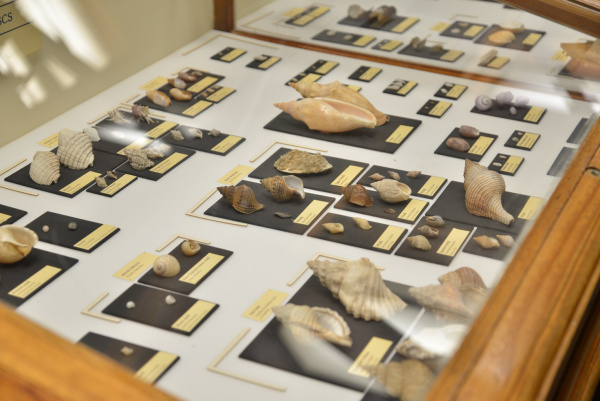 In 1873, one year before he became Otago Museum’s first curator, Captain Frederick Wollaston Hutton published a 116 page “Catalogue of the Marine Mollusca of New Zealand, with diagnoses of the species”. The catalogue had been commissioned by Dr James Hector, who was then working as New Zealand Government’s official Geologist, which is the equivalent of today’s Chief Government Scientist or Science Advisor. And while there is no evidence that Hutton personally visited Rēkohu (Dr Rosi Crane, pers. comm.) the breadth of the catalogue indicates that Hutton studied the diversity of species from the islands to ensure their inclusion.

When we dive into the descriptions for species in the 1873 catalogue, the vocabulary gets quite technical. The basic goal is to create a “word picture” to identify the distinguishing characteristics that will make it obvious to the next scientist that they are looking at the same species. The description of the New Zealand moon snail shell with its ‘about six interrupted spiral chestnut brown bands’ is recognizable on the examples I found on Waitangi beach (pictured). The moon snail is actually a predator which can use its radula mouth like a drill to open clams and other snails for its food. The family is known to make ‘sand collars’ which are their eggs glued together with sand and a snail-produced jelly. 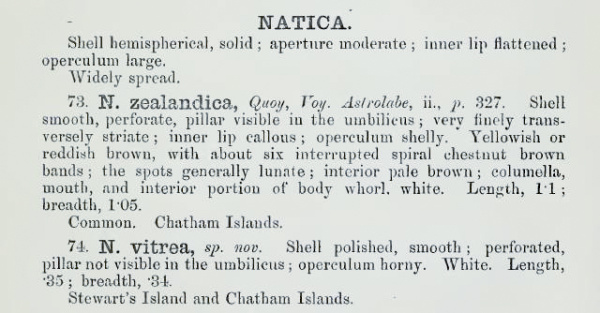 Image: The entry for moon snails (also called necklace snail), currently recognized as Tanea zelandica and Uberella vitrea, respectively, in Hutton’s 1873 “Catalogue of the Marine Mollusca of New Zealand, with diagnoses of the species.” Public domain. The shorthand “sp. nov.” (‘species nova’ in Latin for ‘new species’) means that it is a newly discovered species. 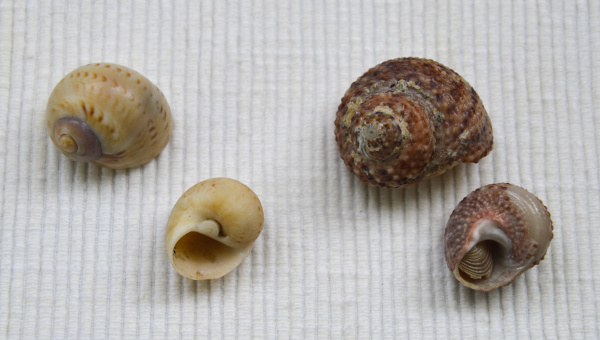 Both Hector and Hutton make a point to thank fellow collectors and locals that contributed study specimens for the catalogue, which included many Chatham and Stewart Island species. Believing it to be the first time the species had been described, Hutton named the southern cat’s eye snail as Liotia (Arene) shandi in the 1873 catalogue in honour of a member of the Shand family. This prominent pakēha family includes Alexander Shand who worked with Hirawanu Tapu to document and publish significant knowledge of Moriori customs and traditions on Rēkohu.

Image: The entry for southern cat’s eye snail, currently recognized as Modelia granosa, in Hutton’s 1873 “Catalogue of the Marine Mollusca of New Zealand, with diagnoses of the species.” Public domain.

However, the southern cat’s eye snail had already been named and described as Modelia granosa in 1784. Taxonomy has governing rules and conventions to ensure that species are formally recognized by only one scientific name. So once the error was found, the new extra name was synonymized, which in this case means that the name assigned by Hutton is on record but the species is formally acknowledged by an earlier scientific name. Also of note is that the southern cat’s eye is not only found on the Chatham Islands as the 1873 catalogue indicates, because the species has since been regularly reported on the mainland. The cat’s eye refers to the operculum, which covers the snail shell opening and can protect it from predators and from drying out when stranded out of water.

Miss Susan Shand is recognized in many of Otago Museum’s records as the donor for dozens of the Chatham Island sea shells from the 1890s, some of which are currently displayed in the Animal Attic gallery.  Although there are no specific records about where each of the shells she donated were collected on the island, there are historical records that the Shand family settled in the Te Whakuru area on the northeast corner of Rēkohu. This region of Rēkohu is home to some excellent rocky shore habitats and tide pools. 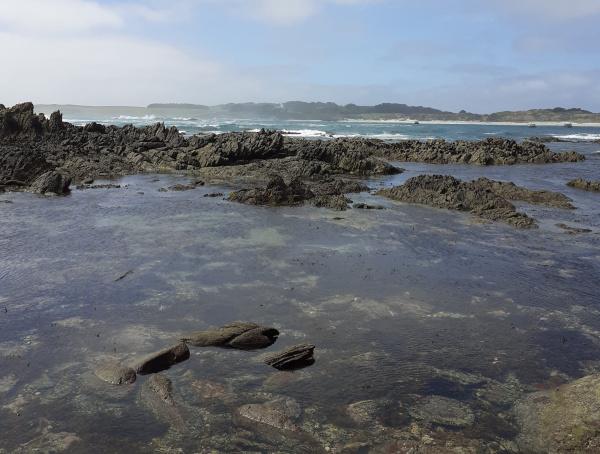 Image: Kaingaroa rocky shore in the northeast region of Rēkohu. Photo by On Lee Lau

A common feature on Rēkohu’s rocky shore are large oval-shaped limpets which cling tightly to rocks during low tide, and move about grazing on algae during high tides. These hardy creatures are well-adapted for intertidal life with their sturdy cap-shaped shells which allow these gastropods to reduce their vulnerability to both wave action and ability of predators to pry them off rocks. This style of shell represents a biological innovation in body plan that has evolved multiple times. So not all limpet-looking creatures are true limpets. This is a good example of convergent evolution in which many different lineages have adapted to similar environmental challenges with very similar morphological features, in this case, their shell shape.

Most locals and visitors to Rēkohu will likely have eaten local fresh pāua collected from the rocky shore. Pāua can easily be considered the most economically and culturally important gastropods in New Zealand. Here, pāua refers to three different abalone species: black foot pāua (Haliotis iris), yellow foot or silver pāua (Haliotis australis) and virgin pāua (Haliotus virginea). All three species are found on the rocky shores of Rēkohu, but it is mostly the black foot pāua that is harvested commercially. Abalone are an important food resource for animals in temperate coastal areas around the world, and their major predators include sea stars, sea otters, and humans. Pāua can defend themselves by clamping tightly onto rocks when they are disturbed, and encrusting bryozoans and sponges on their shells can help them camouflage into the rocky shore background. 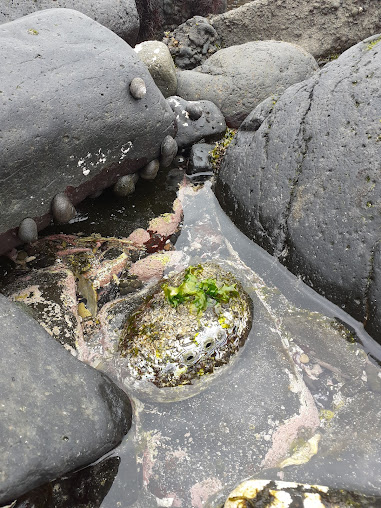 In New Zealand, harvesting of pāua is subject to commercial fishing quotas, recreational catch limits, and rāhui (temporary prohibition of resource or areas for use or access imposed by local imi or iwi) because pāua populations in many areas are still recovering after periods of intensive human harvesting. On Rēkohu, pāua are found mostly in subtidal areas where commercial and recreational free divers catch their quota (or lunch) and there are some areas where pāua are seen at low tides. It is best to check carefully that there is no rāhui placed on an area before trying to collect your own. Empty pāua shells can be found on both sandy and rocky shores on Rēkohu and there are places with mounds of shells washed up by the sea or amassed in middens.

Image: Manukau Point in the southeast region of Rēkohu at rising tide with Pitt Island and Mangere Island in view. Photo by On Lee Lau.

I hope I’ve shown you that sea shells can give us a glimpse of the ocean’s diversity and importance. Human visitors to the foreshore will no doubt continue to collect, describe, eat, and marvel at these organisms at the edge of the sea.

For the next segment, I’ll bring you along to Rēkohu’s lakes to meet a few freshwater fish that are being studied by University of Otago researchers, with myself occasionally assisting in the field work.

Hutton, FW. (1873). Catalogue of the marine Mollusca of New Zealand with diagnoses of the species. Didsbury, Wellington. 116 pp. www.biodiversitylibrary.org/page/1352890