On Wednesday 18 January Otago Museum was notified by the Department of Conservation about a dead Southern Ocean sunfish (Mola ramsayi) found on the Aramoana salt marshes.

Assistant Collection Manager Kane Fleury and I arrived at Aramoana about 6.45pm and met with local resident Bradley, who had first reported the fish. Bradley took us out to its location. 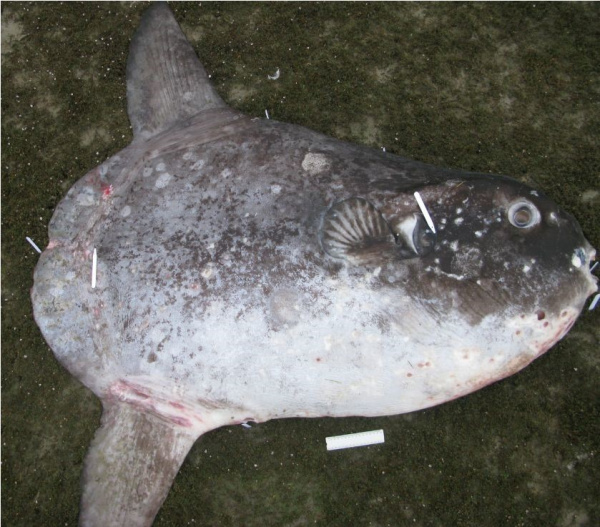 The specimen laid out for photography with marker tags to indicate measure points. | Otago Museum

We utilised the incoming tide to refloat the hefty sunfish and rope-towed it closer to the sand dune. This afforded us drier feet and shelter from the strong winds. 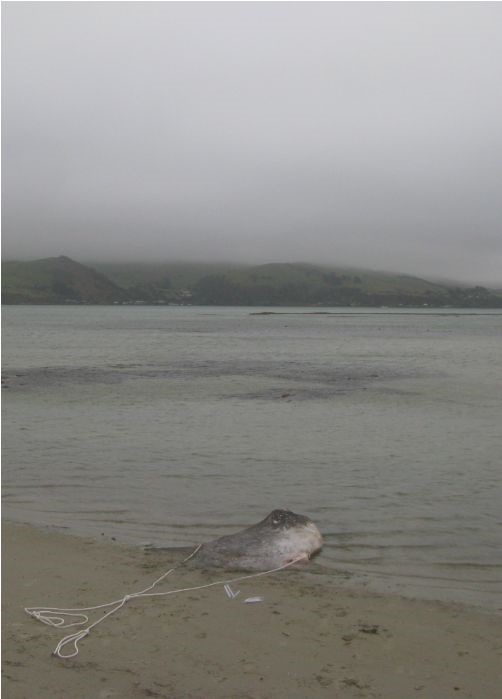 A basic rope tow rig to move the fish about 25 m from the original beach cast location to the shore on the incoming tide. | Otago Museum

We worked our way systematically through a list of tasks, taking photos and collecting various standardised measurements we use for sunfish. We then removed the skin and collagen layer to create a window so that we could see the organs and collect samples. In doing this we were able to identify it as female. One gonad contained a large number of small orange-yellow eggs. 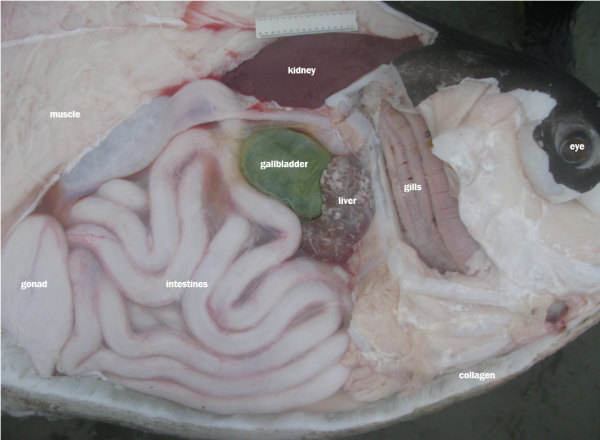 Layout of some of the internal anatomy of the sunfish (scale rule 15 cm). | Otago Museum

The digestive system was removed for later inspection as this required more time than the evening light could afford us. Often, the digestive tracts of sunfish contain a large number of interesting parasite species that help us understand marine interactions. The gut contents also provide useful information about what sunfish feed on locally.

After combing through 8 m of intestines, evidence of its last meal – salps – was found in the lower digestive tract. This sunfish has a kind of pseudo-stomach; it just looked like a slightly fatter part of the intestines. This was full of long white trematodes – parasitic worms. One trematode measured three metres long! 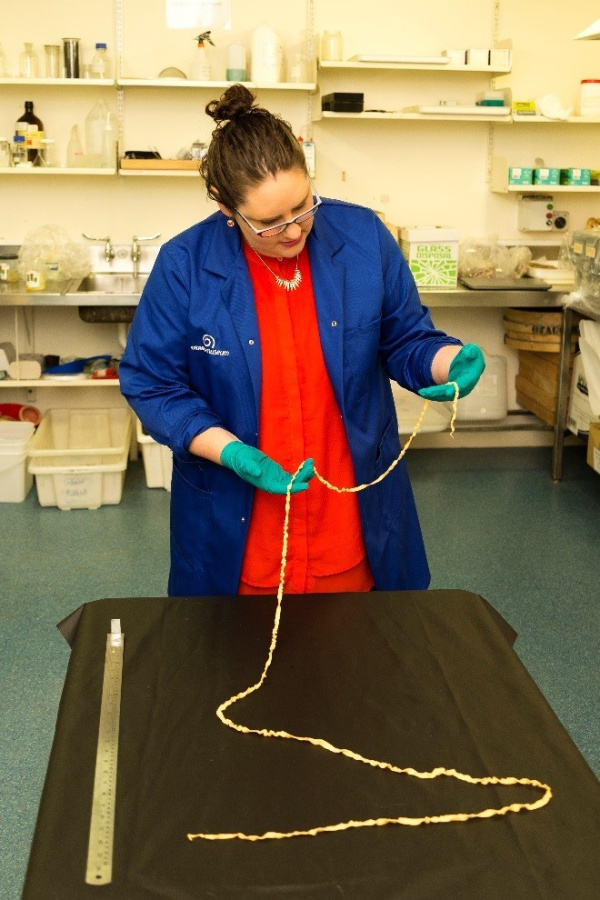 A 3 m-long parasitic worm removed from gut can put you off pasta! | Otago Museum

A tiny 5mm cube of muscle tissue was sampled for genetic analysis at the University of Otago to assist scientists involved in the Ocean Sunfish Research Network based at Murdoch University, Perth.

Their work aims to develop a better understand of the sunfish population diversity in the waters around New Zealand, Australia and Indonesia. The necropsy provides additional information about diet, spawning and health that will feature in upcoming publications.

On turning over the sunfish to check its left side, we noticed that she was missing the left pectoral fin. This did not appear to be a recent injury, compared to the fresher grazes which likely resulted from struggling when she got stuck in the shallows.

The missing pectoral fin on the left side compared with the normal limb appearance on the right side. | Otago Museum

The Aramoana salt marshes are a protected area, so digging a hole to bury the fish would have been destructive, and difficult given the tides. It was decided to leave her dignified and undisturbed-side-up, to allow the seagulls to continue their clean-up feast naturally.

Bradley and Janet, who discovered and reported the specimen, have logged the stranding onto NatureWatchNZ a website where citizen scientists nationwide can upload records of various species they encounter, to help map occurrences. Collectively this builds patterns of distributions and ecosystems, assisting scientists and public to understand our flora and fauna in different parts of the country. If you enjoy nature and photography it is a great way to get involved.