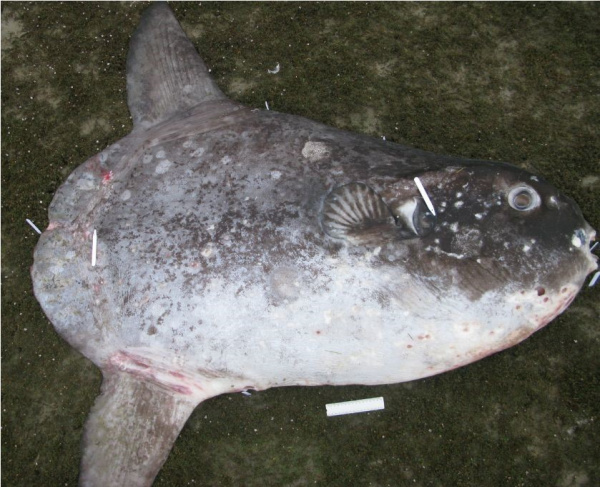 Over the past four years the taxonomy of the world’s heaviest bony fishes has been under review, and a new species has been discovered. The genus Mola, commonly known as sunfishes or rātāhuihui, has been studied by a team of international researchers from Dunedin, Wellington, and Japan, led by PhD candidate Marianne Nyegaard of the School of Veterinary and Life Sciences at Murdoch University, Western Australia.

The discovery reads a little like the opening of a mysterious monster movie. A team of Japanese researchers first found genetic evidence of an unknown giant sunfish species when they were gifted a sunfish tissue sample from a stranding off New South Wales in Australia ten years ago. The huge fish continued to evade the scientific community because no one knew what it looked like compared with the other species, Mola mola and Mola ramsayi, or where exactly to find it.

The focus of Nyegaard’s PhD was researching the population genetics of Mola ramsayi the short ocean sunfish in the Indo-Pacific region. Her research switched gear when she noticed the same mysterious genetic grouping occurring in some specimens caught in Australian and New Zealand longline fishing.

Nyegaard began an epic detective journey to confirm the taxonomic existence of the hoodwinker sunfish. She had to find, measure and examine the physical characteristics and take genetic samples from 27 specimens collected from New Zealand and Australia to identify, describe and define Mola tecta, and search social media to determine its distribution further afield.

Sunfish are tricky for researchers and museums to collect, preserve and store whole, however Nyegaard and colleagues located and examined specimens held in museums around the world, and deciphered taxonomic literature dating as far back as the 16th century where the earliest descriptions and illustrations of sunfish occurred among those of mermen and other mythical sea creatures. The task also involved organising logistics to collect modern samples by visiting remote beaches or providing instruction to locals to collect skin samples from dead stranded fish or bycatch. 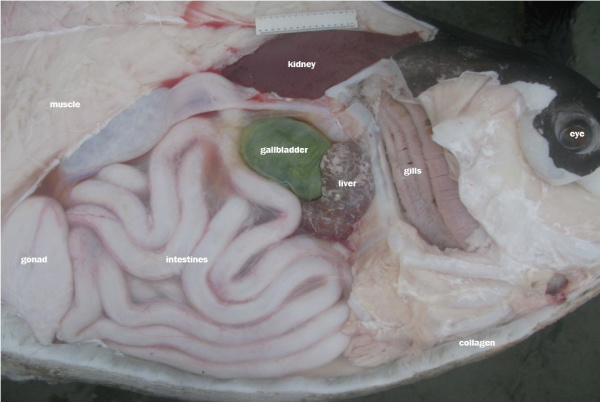 I first met Marianne fairly early on in the project, when she visited the Otago Museum in 2014 for a day to measure and examine the two sunfish casts in the collection. Patrick O’Brien, the Museum taxidermist, cast them from fresh individuals as part of the display preparations for the fish gallery in the 1960s. She greeted me warmly and handed me a fresh clavus – the stumpy marginal tail of the sunfish. She had collected it the day before from a stranding at Birdlings Flat, Canterbury – and wondered if I wouldn’t mind putting it in the freezer. She had noticed something curious about the physical features of the sunfish tail and needed to preserve it, but couldn’t take it back to Australia for quarantine reasons.

Sampling packs (like the one above) were put together and left with the Department of Conservation, Otago Museum and New Zealand Marine Studies Centre at Portobello for collecting samples from reported local strandings and to photograph any live sightings. Tissue samples were then analysed by Joanne Gillum at the Gemmell Lab at the University of Otago’s Anatomy Department. 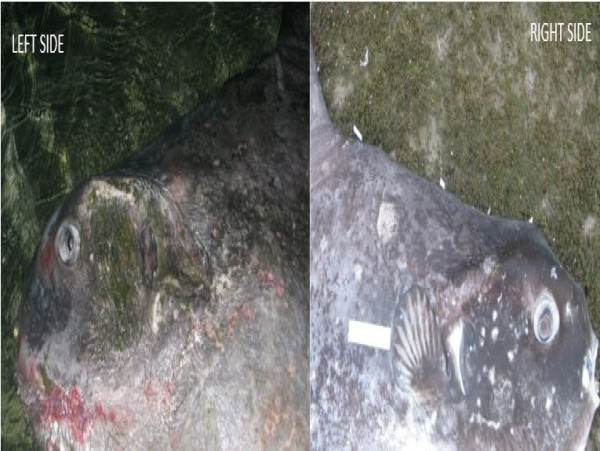 Nyegaard’s findings show that anatomically the three Mola sunfish species look very similar externally, until they reach a total length of around 65 to 70 centimetres where the species characteristics become obvious. Compared to M. mola and M. ramsayi, Mola tecta remains sleek and slender even at larger sizes, differing from the other species by not developing a protruding snout (which looks like a slightly comical nose), or pronounced humps and bumps. The physical tell-tale signs of Mola tecta are a smooth ‘wishbone’ shaped clavus band, and fewer than seven hard disc-like tips called ossicles along the edge of the clavus. 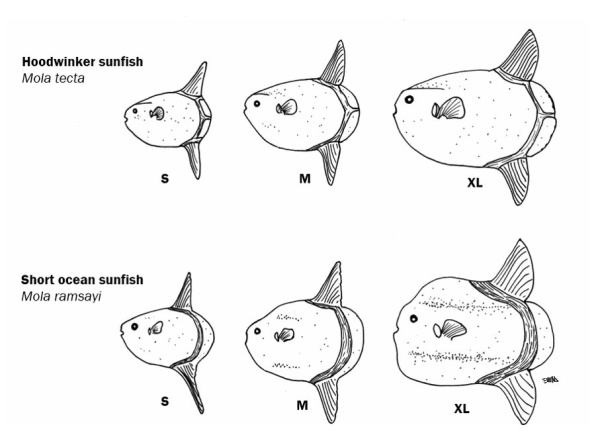 Details of the tail, and change in body shape as Mola tecta and Mola ramsayi grow in size | Emma Burns, Otago Museum adapted from illustrations of Mola tecta by Michelle Freeborn, Te Papa Tongarewa and of Mola ramasyi by Etsuro Sawai.

The work by Nyegaard and her co-authors in New Zealand, Australia and Japan is more than just a new name for an old fish. Finding and describing a new species (taxonomy) is a vital and important process because it is part of a standardised global language allowing science and society to talk about all living things on Earth. It underpins research in biodiversity, biosecurity, harvesting and conservation. This work demonstrates there are still giants among the species yet to be discovered and described. In a world that is changing quickly we need taxonomy now more than ever.