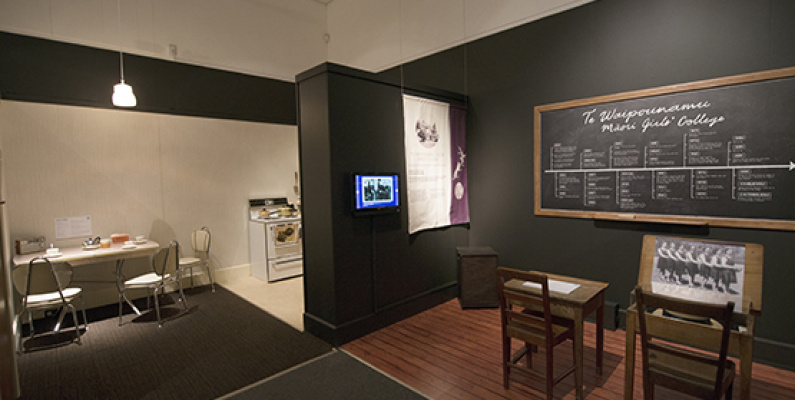 Otago Museum’s Hākui: Women of Kāi Tahu exhibition has been announced as a finalist in the Ngā Aho category of the Best Design Awards.

The exhibition, which closed in May, shared the stories, achievements and legacies of respected Kāi Tahu wāhine – as seen from the perspective of kā uri whakatipu, today’s generations – through objects, photographs and memories.

Interactive elements also featured, inviting visitors to step inside Aunty’s kitchen, hear the pronunciation of te reo Māori words and placenames, plait kāwai kete (kete handles), listen to interviews and waiata, share memories of the women in their own lives, and plenty more.

The Best Design Awards, an initiative of the Designers Institute of New Zealand, is the annual showcase of excellence in graphic, spatial, product and interactive design. The award that the exhibition is up for, the Ngā Aho Best Award for Aotearoaness, recognises excellence in both Aotearoaness and collaborative practice.

Craig Scott, Head of Design at Otago Museum and Creative Director of the Hākui exhibition, is delighted that it has once again been recognised on a national stage following its success at the 2016 New Zealand Museum Awards earlier this year, winning the Metropolitan Taonga Māori Award.

“This latest announcement is further recognition of the dedication of all involved, and of the successful collaboration of whānau, rūnaka, iwi, the Hākui Steering Kōmiti and the Otago Museum team that brought this concept to life,” says Scott.

Winners will be announced at an awards ceremony to be held in October.