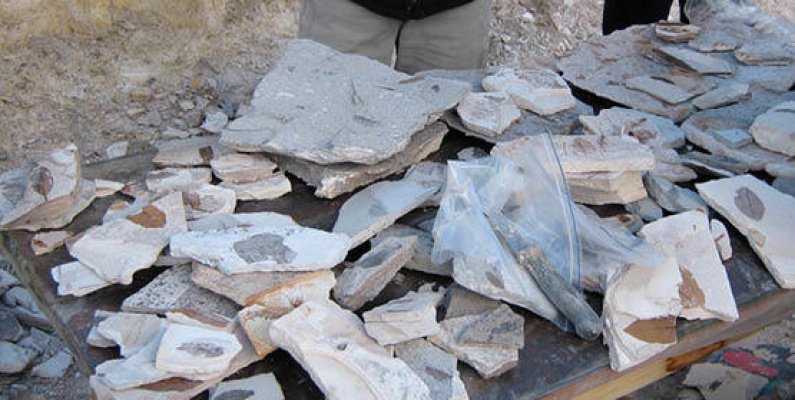 Have you wondered what diatomite is, where it is found in Dunedin and around the world, and what fossils have been found at the Foulden Maar diatomite deposit? Read on below and find out more!

Diatoms are microscopic algae (between two micrometers and half a millimeter in size) that live in water and soil across the planet. [1] Diatoms create a silica structure, effectively a glass house, or exoskeleton, and come in many shapes and sizes. [2,3] There can be millions of diatoms per cubic metre, and these are responsible for producing more than 20% of earth’s oxygen every year. [1,2,4] Diatoms evolved in the distant past, and appeared in the fossil record about 135 million years ago. [3] Researchers estimate that there are more than 20 000 species of diatoms on the planet, many of them still unknown to science. [1,2,4] Because only some types of diatoms thrive in certain conditions, such as acidic/alkaline, hot/cold, or salt/fresh water, they can be environmental indicators, which give us insight into the water conditions during the time that they were living. [4]

Diatoms bloom every spring when conditions are ideal for photosynthesis and reproduction. [5] Seasonal diatom blooms create layers at the bottom of lakes and oceans as the diatoms die. Many dead insects, leaves, flowers, fish, and other animals fall into those lakes and oceans between layers of diatoms. [6] Over time, more layers accumulate and pressure builds to compress the layers into rock. If the environment is anoxic, or low in oxygen, the organic materials from these dead insects, leaves, flowers, fish, and other animals that were between the layers will be preserved.

At the Foulden Maar site, the fossils have been preserved in anoxic conditions between these layers of diatoms without physical disturbances from scavengers or rivers. This means that the preservation of the fossils at this site includes intact specimens with fine structures and detail; this allows researchers to identify the species that lived 23 million years ago in Otago. [6] 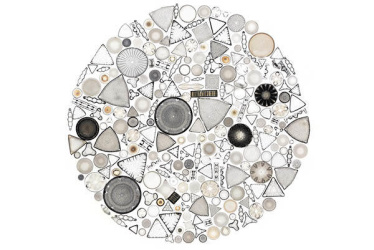 What is diatomite or diatomaceous earth?

Diatomite, also called diatomaceous earth, is a sedimentary rock made of many layers of ancient dead diatoms. It is mostly composed of silica and water. The rock is easy to break apart and has low density, so dry samples will float on water. Because diatomite is made of microscopic hollow silica exoskeletons, it can be used to filter microbial contaminants from liquids and as a mild abrasive. [7,8,9]

Each diatomite deposit is unique, and has a physical and chemical signature based on the diatom species that makes up the rock and other materials from the area. [7]

Diatomite is used primarily for producing filters and absorbents. [8,9] Approximately 59% of diatomite consumed in the United States is used to make filtration media, 40% is used for absorbents, fillers and other industrial applications, and 1% is for biomedical use. [9] There are alternatives to using diatomite for filtration media or absorbents, including: perlite, limestone, and silica sand. [8,9]  Other industrial applications can include using diatomite as an additive for stock feed, pesticide or as fertiliser.

Where is diatomite found?

Diatomite deposits are found in former lakes and seas across the world. Mining of diatomite occurs in many countries including the United States, Denmark, China, South Africa, Peru, Mexico, Japan, France, Argentina, Turkey, Spain, Germany, and Australia. [9] Australia has recorded 76 diatomite deposits, [7] which are mostly concentrated in Western Australia and New South Wales. [8] There are also diatomite deposits in Victoria, Queensland, and Tasmania. [7]

There are an estimated one billion metric tonnes of diatomite in global deposits, which would take hundreds of years to mine at the current global rate of three million tonnes per year. [10] Of this reserve, about 25% is located in the United States, which currently dominates the industry. 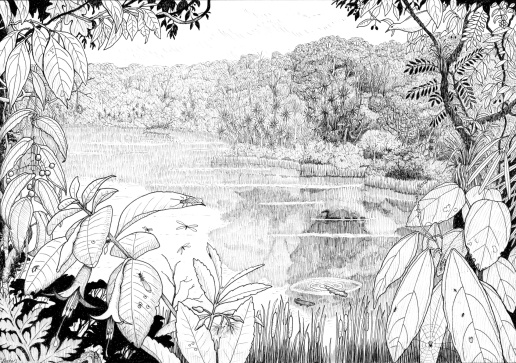 What kind of fossils have been found in diatomite?

Internationally, extraordinary fossils have been found within diatomite deposits including mammals, fish, amphibians, reptiles, insects, seeds, leaves, and pollen. At one site in the Saint-Bauzile region of France, rodents, a horse, a cow, a pig, and a rhino, with their entire skeletons and details of skin and fur structures, had been preserved. This deposit offered a glimpse into the community that surrounded this lake during the late Miocene period, about 7.5 million years ago. [19]

In the Pisco Formation in Peru, hundreds of whale specimens (some with evidence of soft tissue) were found in a marine diatomite deposit. [20]

Diatomite fossil deposits and assemblages are extraordinarily interesting because of the numbers of fossils, and the diversity of what is preserved. In some cases, researchers can reconstruct the entire community of fish, insects, and plants that lived in the area based on the fossil discoveries. [6,19,21]

What kind of fossils have been found at Foulden Maar?

The fossil discoveries from Foulden Maar are significant in helping us understand the evolution and distribution of plants, fish, and invertebrates 23 million years ago; a period of time when much of the land that we currently know as New Zealand was submerged in the ocean, and the climate was much warmer than it is now. [16,22,23] Foulden Maar is unique in showing Miocene period flora and fauna with a high level of detail and preservation. [22,24,25] This is a period when many of New Zealand’s indigenous fauna as we know them today started to evolve. [11,26] The fossil assemblages that are within the maar can help us with paleo-reconstructions of ecosystems from 23 million years ago; a time when there were no glaciers in New Zealand or in Antarctica. So far, the maar has shown us fossil fish and an incredible diversity of insects and plants, including leaves, flowers, and pollen. [6,24,25]

Highlights of fossils from the Maar

The diatomite deposit at Foulden Maar holds a significant number of well-preserved fossils that are not likely to be found anywhere else within New Zealand, or the world. [6] These fossils enrich our understanding of New Zealand’s natural history, with many more still buried and preserved for future discoveries. Of the fossils recovered from Foulden Maar, the oldest whitebait fish fossils from 23 million years ago were a significant discovery. They are some of the most well-preserved and intact specimens ever found, and enabled scientists to name a new extinct species, Galaxias effusus, based on the discovery. [11]

Many new species of plants and insects are still being scientifically classified from the fossil material recovered at the site. An extinct plant species, Fouldenia staminosa, was described from a fossil flower found in Foulden Maar that had preserved pollen and reproductive structures. [14] Fossil flowers with associated pollen are very rare worldwide, with only 40 examples known before the Foulden Maar discoveries. [14] Additionally, the preservation of fossil leaves found at the maar have revealed cellular details of the leaves and its veins, along with the insects that lived on the plant. [6,15] By studying these fossils and plant pollen (a field of study called palynology), researchers are able to deduce the climate and ecological associations that existed at the time. [6,14,22,23]

Foulden Maar has been the site of many of New Zealand’s first discoveries for fossil invertebrates including:

The well-preserved fossils of spiders, stoneflies, dragonflies, termites, flies, caddis flies, true bugs, beetles, wasps, ants, and bees that have been discovered at Foulden Maar provide a unique opportunity for researchers to study the invertebrate biodiversity of ancient New Zealand. [6,24,25] Most of New Zealand’s insect fossil knowledge has originated from this site, and the diversity of insect fossils from the marr is unparalleled. [6]

Interested in knowing more about Foulden Maar and the surrounding issues?  On Lee Lau, Assistant Collection Manager, Natural Science, and writer of this blog post, will be on Radio One 91 FM on Wednesday, 31 July at 8.30am

[2] Alverson A. (2014) The Air You're Breathing? A Diatom Made That. www.livescience.com/46250-teasing-apart-the-diatom-genome.html

[5] Tiselius R and Kuylenstierna M. (1996) Growth and decline of a diatom spring bloom: phytoplankton species composition, formation of marine snow and the role of heterotrophic dinoflagellates. Journal of Plankton Research 18:2, 133-155

[7] Crespin I (1945) A study of Australian diatomites with special reference to their possible value as filter media. Commonwealth of Australia, Bulletin 7, Misc Series 3.