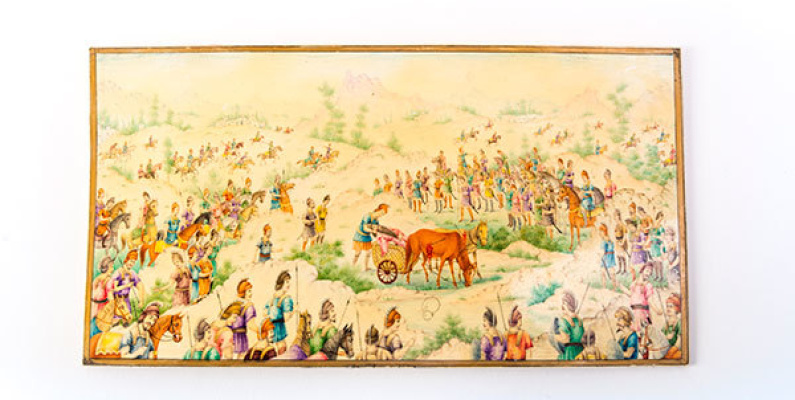 A miniature painting, displayed in the smallest section of the est. 1868 exhibition, is interesting for a variety of reasons.

Its subject matter – Alexander and Darius – draws us into the ancient world, when the Macedonian king, Alexander III (the Great), conquered not only all of Greece but much of the eastern world known to the Greeks, from the Aegean Sea to the Indus River. In the course of that rampage (Alexander is still not kindly remembered in some of the areas he brutally conquered), the Macedonian and his Hellenic League army fought and defeated the ruler of the enormous Persian Empire, Darius III.

Alexander didn’t kill Darius; that was a deed accomplished in 330 BC by the Persian king’s own retinue in the aftermath of his defeat at the final battle of Gaugamela (in modern northern Iraq), and Darius’s flight to Bactria in the eastern reaches of the Persian Empire (in modern Afghanistan). Our painting shows Alexander in the centre, placing the dead or dying Darius in the cart of a two-horse chariot. The Greek historian, Arrian, writing much later in the 2nd century AD says that, “Alexander sent Darius' body back to Persepolis, ordering that he be buried in the royal tombs, like the other kings before Darius”. [1]

Another eye-catcher is the painting’s scale, measuring only 25 cm x 13 cm. The figures in the painting are tiny: the figure of Alexander is about 2.7 cm in height, while the horsemen in the right background are only about 5 mm tall. The technique has been well chosen for such delicate detail: “painted with cat's whisker brush and Persian enamels”, says the Museum’s Register. Miniaturism in a naturalistic style, such as this painting exhibits, demands fine detail, and fine detail can best be delivered by the finest of brushes. And all of this has been done on fine, smooth ivory.

The artist himself is also a source of some curiosity. The entry in the Museum Register states that the painting was by “the present great artist Musavvir, in Isfahan, Persia”. This “Musavvir” may simply be an anonymous 20th century Iranian painter – after all, “musavvir” in Persian means “painter” – but there was a well-known 17th century Persian miniaturist named Mu‘in Muṣavvir, who was born around 1617, and worked in Isfahan around 1635 to 1697. He was the most prolific of the students of the master painter, Riza, whose style he followed, though his coloration is regarded as less intense. [2]

Finally, the donor of the painting is of great interest within the context of the Museum’s Classical collections. Dr Lindsay Rogers was one of the major benefactors of the Otago Museum in the middle of the 20th century. A surgeon by training and by profession for much of his life, Rogers was a regular contributor to the Museum’s Classical and Near/Middle Eastern collections. He has attracted some fame in New Zealand military history, as he served during World War II as a doctor among Tito’s partisans in Yugoslavia, and published a memoir of his service in his book, Guerilla Surgeon, in 1957. Recent work by the Slovenian journalist and historian, Alenka Puhar, resulted in a detailed study of Rogers’ wartime experience in Yugoslavia.

After being demobbed in 1945 Rogers went to Baghdad, where he served as Professor of Clinical Surgery at the Royal School of Medicine. He stayed there until 1950, when he left to travel home to New Zealand, where he returned to his GP practice in Te Awamutu, married, and bought a farm. [3] He died in a car accident during a torrential storm while on holiday in New Caledonia in 1962. A friend of Otago Museum Director H D Skinner, Rogers acquired many items for the Museum’s Classical and Near/Middle Eastern collections during his time in Iraq. 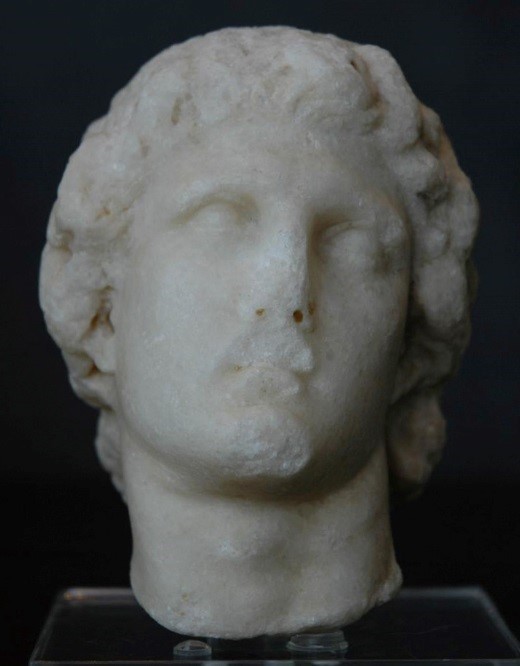 Lindsay Rogers had a remarkably good eye for antiquities: another extraordinary acquisition due to him is the small, marble portrait of Alexander the Great, on which I wrote some years ago. [4] It is on display in the People of the World gallery.

In the Museum Register, the head is said to be from Parthian Kish, which would place it squarely in Iraq, about 12 kilometres east of Babylon and 80 kilometres south of Baghdad. This provenance from the eastern half of Alexander’s empire makes the portrait one of the rarer images of the king, as most others come from the western part in Greece and Egypt. I date it to about 330 – 300 BC, close to the time of Alexander. In terms of subject matter, it nicely matches the painting of Alexander and Darius.