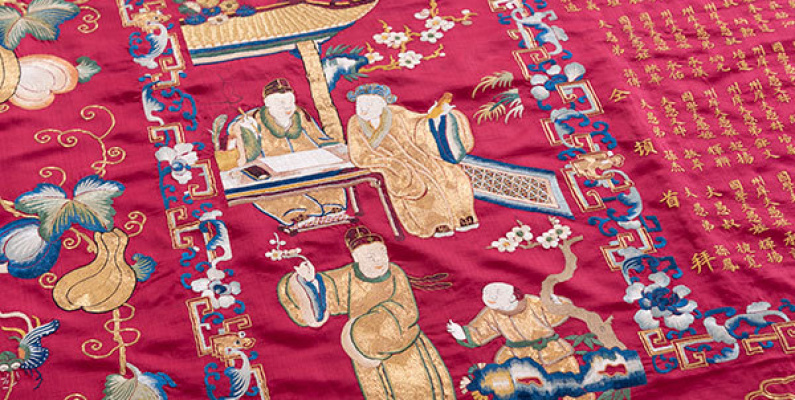 Imagined as our largest birthday greeting, a stunning celebratory textile is on display in the biggest section of est. 1868.

The dark red, silk body is lined with a plain weave fabric. It is embroidered with silk floss, plied silk and wrapped gold threads, which are worked in running stem, satin stitch and a variety of filling stitches. A central panel of Chinese calligraphy is surrounded by vignettes and symbolic images associated with good fortune and happiness.

Textile scholar and former Otago Museum honorary curator Margery Blackman arranged to have the two-ply gold silk thread lettering translated when preparing the hanging for display in the 1998 exhibition she curated, From Emperor’s Court to Village Festival. [1]

As Margery has documented, the hanging celebrates the life of Anren Wu “on her 71st birthday on the 23rd day of the eighth month of 1829. Her maiden name was Zu and she was given the honorific title Tai Anren because both her husband and son were sixth grade government officials. The word shounu (birthday mother) was used to praise a woman of able and virtuous character. ‘She is like an orchid’s refreshing fragrance, noble minded, moral and clean as jasper. When her birthday comes, her family and friends will unite in celebration to eloquently praise her virtue and appearance.’ ”

The text was written by Zu Tai Anren’s nephew, the scholar, Guanying Zeng. The characters were prepared for embroiderers to follow by a cousin-in-law, Baoto Yan. [2] Margery suggests that after those personal and familial origins, the hanging was eventually made in a professional workshop.

Cheung et al have noted that birthday hangings were a popular and traditional gift to present auspicious wishes in China in both the Ming (1368–1644) and Qing dynasties (1644–1911).  Commissioned by younger relatives or colleagues, they were placed on view at a birthday banquet. [3]

Looking at the Lady Zu Tai Anren’s birthday hanging after reading a recent article by Alya Lepine [4] led me to see connections between aspects of its tradition and that of European embroidery samplers; in particular the stitching of relatives’ names, the demonstration of needlework skills, and the display of textile art that connects women’s lives to larger cultural histories. 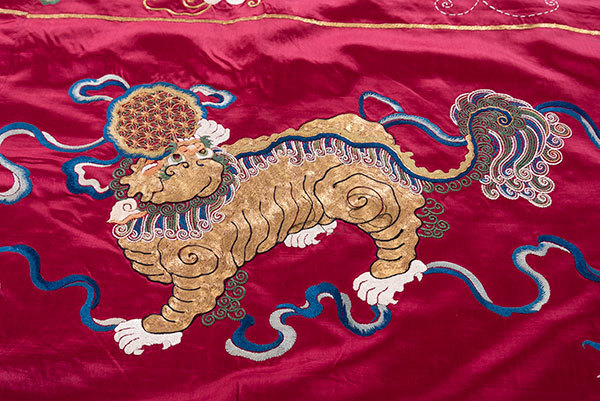 The hanging came to the Museum through the generosity of the Otago and Southland branch of the Chinese Association of New Zealand, who purchased it at the Churchill auction held in the Otago Art Society’s rooms at 9 Dowling Street in October 1942.

As Anna Blackman of the Hocken Collections has explained, four Churchill auctions were held in New Zealand in 1942 to raise funds for the Provincial Patriotic Councils. “The idea was started when Prime Minister Peter Fraser visited Winston Churchill in England. Churchill made a gift of a book written by an earlier Sir Winston Churchill and published in 1675, Lives of all the Kings of this Isle, to be auctioned in NZ to raise patriotic funds. Hearing of this gift the writer Pat Lawlor contacted the Department of Internal Affairs and suggested that they encourage local committees to organise local auctions of donated material to augment the funds raised by the sale of the book. People up and down the country were encouraged to donate their rare books, documents, manuscripts, paintings, prints and Maori and historical “curios” to the cause.” [5] 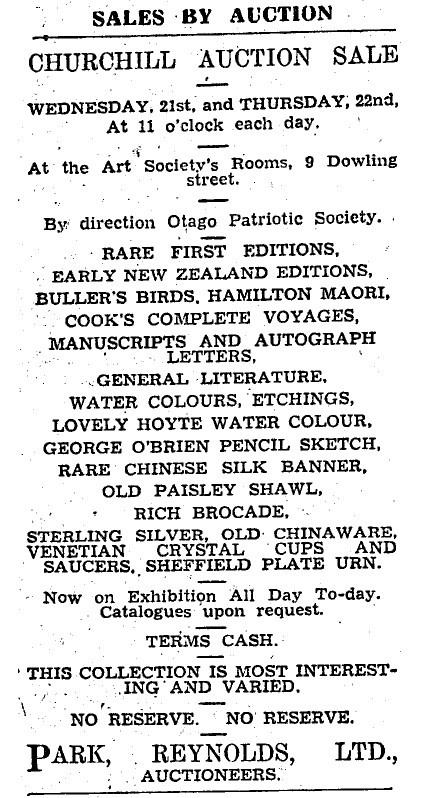 Two months later, under the heading “New Features at the Museum”, the Otago Daily Times reported:  “A magnificent silk embroidered Chinese banner, 20 feet in height by 12 feet in width, was one of the outstanding new exhibits which were on display when the Otago Museum was visited on Wednesday by members of the Association of Friends. The border is embroidered with Chinese scenes in brilliant colours, and the centre is occupied with an inscription in Chinese character, the beauty of which is just as striking. The banner, which is believed to be about a century old, was presented to the Churchill auction by Mr Arthur Barnett, and was purchased there and presented to the Museum by the Otago and Southland branch of the Chinese Association of New Zealand.” [6]

Help us give est. 1868 one final hurrah on Thursday 11 April. After Dark @ OM will feature the biggest sounds, the sexiest performances and the tastiest culinary  experiences. 7pm–10pm, R18. Book tickets here.

[1] Margery Blackman, 1998. Emperor’s Court to Village Festival: Chinese costume and textiles from the collection of the Otago Museum exhibition catalogue. Otago Museum, with support from Asia 2000.