A Lot of Zeros

Last month, New Zealanders were told that the annual inflation rate for the second quarter of 2016 had “come in slightly softer than expected… at 0.4%” – a far cry from the experience of Hungary in 1946.

Seventy years ago, immediately after World War II, Hungary suffered a severe hyperinflation that economist Peter Bernholz described as “the biggest paper money inflation of all times”.  It has been calculated that between August 1945 and July 1946 the general level of prices rose at more than 19,000 percent per month” and that “in July 1946, Hungarian prices more than tripled each day”. [1]

The Otago Museum has a small group of banknotes issued in that year of monetary madness.  They were a 1947 donation from the Revd George Angus Fulton Knight (1909 – 2002), then newly appointed Professor of Old Testament Studies at Knox Theological College, Dunedin. 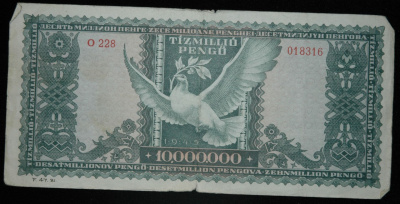 A message he sent with them said “It has occurred to me that you may care to have the enclosed banknotes issued in Hungary last year. Hungary went through the worst inflation known in history, and after I left it in July 1946, the pengö actually burst, since it was impossible to calculate its value.”

Knight’s story is as interesting as his gift.  He was called to be Director of the Scottish School and Mission in Budapest while still at university in Glasgow.  He and his wife Nancy travelled there soon after their marriage in 1935.  The school, established in the 19th century, educated Jewish and Christian girls together, in the hope of combating anti-Semitism in Eastern Europe.

Soon after WWII broke out in 1939 Revd Knight was contacted by a British Legation staff member with links to the Secret Service.  Hungary was a neutral country until 1941, and George Knight agreed to help with translations, passed along information, scouted for watchers, and hid radio transmitters in his car boot while travelling as a “Swedish professor”.

In May 1940, however, the Knights left Budapest for Britain and spent the rest of the war years in Scotland.

Revd Knight returned to Hungary for six weeks in the spring of 1946 – he was told he was the first British civilian to enter Hungary after the war ended.  He said “Nearly all my friends were now in prison… virtually none of my Jewish friends had survived”.

In his autobiography [2] he described himself clambering over rubble to find “a restaurant where perhaps only spinach was served” that he paid for by exchanging “a British pound note obtained only in the central bank at exactly twelve noon.  One rushed to eat after twelve before the second devaluation of the day occurred at 3pm.”

Less than a year later the Knight family was in Dunedin, where they stayed for 12 years.  George and Nancy returned in 1985 and spent the rest of their lives here. 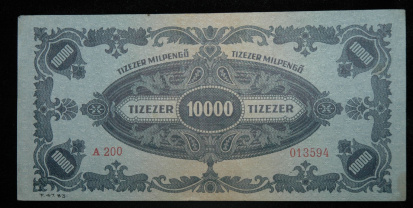 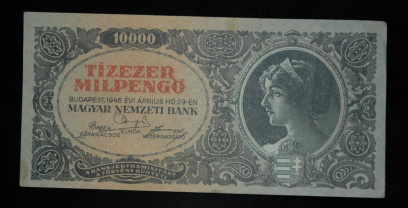