Dr Webster generously contributed this post about a shoe from our collection which we lent for display in Fashion Rules OK. We love seeing the Otago Museum collection being shared with the world, and it’s a treat to have Dr Webster share her expertise with us for iD Dunedin Fashion Week.

In co-curating an exhibition of fashion books, one of my aims was to connect two of the ways we experience fashion: writing about it, and partaking in it. One way of doing this is to call attention to some wonderful object of material culture – an actual fashion item that was made, purchased and worn by an individual.

Shoes are perfect for this. But which ones? They had to be:

Shoes with these qualities are unlikely to be found outside a museum collection, so I approached the Otago Museum.

With assistance from Curator, Humanities Moira White, we found the perfect shoes. I had already decided that just one shoe would appear in the exhibition. A single shoe is more arresting; a pair may suggest an absent person, whereas the solitude of the individual arouses curiosity and invites closer inspection. 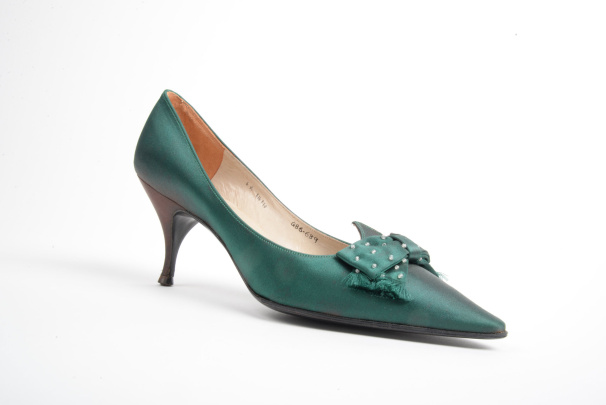 One of a pair of Christian Dior shoes; Otago Museum Collection

These mid-twentieth century shoes have an immediate charm, assisted – but not overwhelmed – by the Christian Dior stamp on the inner sole. The style is in keeping with late 1950s or early 1960s fashions. The uppers are made of emerald green satin, with bows of the same material and small clear glass beads sewn on as spots.

The materials suggest the shoes were designed for evening wear. The soles are leather and the heels are low stilettos. The slender, long lines of these shoes are created by the combination of low sides, heel height, the pointed toe and small peaks above the bows. The perfect balance of these features creates their elegance. 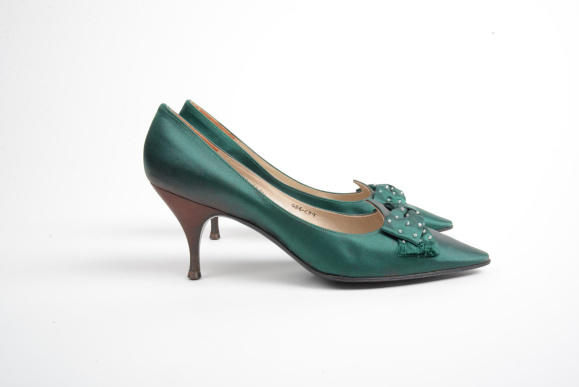 They were probably made to match an outfit in the same shade of green. Designed to complete a particular Dior ensemble, they would have been an expensive purchase, and it’s unlikely they were worn with anything else. There are only small signs of wear.

Couture shoes are generally very well-made shoes and, with the low heel, these would be quite comfortable to wear. The shoes were given to the Otago Museum by Mrs Maxwell Smith, possibly Catherine Annie Smith, née Malcolm.

No other information is recorded about the donor or where the shoes were purchased and worn.

The label ‘Souliers Christian Dior’ is intriguing. It’s the general Christian Dior label, not the specific one used on shoes created by Roger Vivier. However, these shoes share similar characteristics with those designed by Vivier – such as the spotted bows – so it seems likely that either he designed them or they were heavily influenced by his designs.

Between 1953 and 1963 Roger Vivier designed shoes exclusively for Dior. He became the first – and only, as of now – shoe designer to share label credits with a couturier: ‘Christian Dior crée par Roger Vivier’.

Vivier was already known as the designer of coronation shoes for Elizabeth II (gold kid sandals, studded with garnets) and some say he was the first to design stiletto heels, developed to complement Dior’s New Look in the early ’50s. However, the invention of the comma heel, thorn heel, and 'talon choc' are attributed to Vivier with much more certainty.

Shoes like these tell another story. They provoke questions about what we create, buy and wear, and why. As material culture, they can teach us how to read the past. 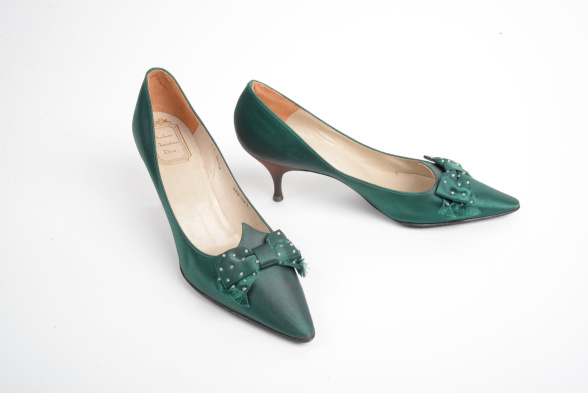 The shoe was part of the Fashion Rules OK exhibition in the Special Collections, University of Otago Library from March–June 2016. It will be available as an online exhibition as well.